For any show to be successful and turns to a hit, it does not depend only on the lead role actors, it is a collaborative work of lead and supporting roles, sometimes even, supporting roles are of the same importance as lead roles, they are pivotal and have eminent significance to the course of events.

This article is going to go through the list of best supporting actresses in current TV shows. Who plays Preeti the second lead role in the popular show Yeh Un Dinon Ki Baat Hai, deserves applause for the efforts she is putting into that character.

The actress whose father passed away a couple of days ago, could steal the hearts of the viewers, she gave Preeti a soul and a spirit, she made an attachment between Preeti and the viewers, who saw her growing up with Sameer and Naina, they saw the molding of her character, the phases she went through, this success made her character as important and influential as the leads.

Her choice of costumes and make up was quite suitable for every stage the character went through, that is the kind of success which can be added to her CV cause all goes back to the 90s. The actress who plays Kuhu in Yeh Rishtey Hain Pyaar Ke seems to be happy with the reviews of the viewers of the show, Kuhu who is the outcome of an illegitimate relationship between Shaurya and Varsha and the half sister of Abeer and Kunal is well accepted by the family, indulged by all members, this makes her a multi dimensional character, she is  good girl, yet she fears losing all this with a new member(Mishti) joining the family.

Kuhu that modern stylish girl, with that childish vibrant, lively personality, Kaveri seems to have put alot of concentration into her character, that is not only in terms if the acting but rather goes well with every tiny detail of the character. Mohena who plays the role of Kirti in Yeh Rishta Kya Kehlata Hai, though she will get a long vacation soon, as she is getting married, her charisma and talent were not misplaced, she gave this character a special flavor and taste that no one can ever deny, she added some special charm to the Naksh’s family.

Showing all those emotions on the small screen, Mohena could win the hearts of the viewers and carve her name into the minds of the viewers, whether she is quitting the show or not will not do her any harm, cause the significance she made into the show can never be forgotten.

Pooja that very creative actress who was chosen to play the role of Nivedita Basu in Kasauti Zindagi Kay 2, seems to know what she has to do from the start, she made the character in a way that is completely different from the old version and added part of herself to the character.

Her choice of that wavy like style of hair and this special way of draping the saree, even the color and nature of her make up contributed in giving an account of that strong bossy lady she is portraying. The innocent looking actress who is part of Nazar supernatural show, playing Tara Khanna had quite an impact on the viewers, her love story then marriage from Mayank the asuransh.

An angel like character falling to a demon, he was supposed to watch her but instead he cherished her and fell in love with her, the chemistry between Jigyasa and Sumit Bhardwaj is definitely perfect, the emergence of their love story and her entry to the show was like a revival to it cause the makers could smartly make a subtheme that can go parallel andas important as the main theme. 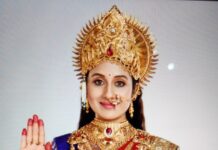 RadhaKrishnn 16th July 2020 Written Update: Arjun gets to hear about...