Ekta Kapoor’s “Naagin 5” is the current talk of the town and for all good reasons. The supernatural thriller franchise is one of the most loved shows on the Indian television and the current season is no less. While the audience was shocked to see Sharad Malhotra’s bad boy avatar in the show, his chemistry with Surbhi Chandna is a treat to sore eyes. What’s more? Well, the makers are introducing a new twist in the storyline, a glimpse of which was shared by the them on their social media account.

A teaser was released recently which shows Bani, played by Surbhi, and Veer, essayed by Sharad, tying the knot. Yes, you read it right, VAni is finally uniting. In the video it shows that while Veer vows to destroy Bani, Bani swears that even she will make him pay for it. But, even though they are against each other, this has made their fans trend VAni [(V)eer+B(Ani)] on Twitter. And it’s not just in India, they are trending in Egypt as well as Pakistan.

Since the time the show has gone on air and Sharad and Surbhi were introduced as the leads, the audience has been rooting for the duo to unite, even though they are pitted against each other. And looks like the makers heard them. It will be interesting to see what the future episodes hold for VAni, will they fall in love? Will Naagin Bani bring out the good in Cheel Veer? We sure don’t know it yet, but the audience is definitely in for a treat in the upcoming episodes, so don’t forget to tune in.

Also, Mohit Sehgal, who plays Jay, is seen holding a snake in the teaser and is saying that he will destroy both Veer and Bani. What’s this wicked plan? The show is getting interesting with each episode, and the next episodes will definitely enthrall the audience with its drama.

“Naagin 5” airs on Colors every Saturday and Sunday at 8 p.m. 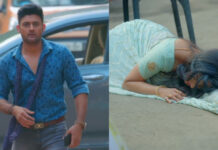