The makers of popular show ‘Nazar’ are leaving no stone unturned to keep its viewers glued to their show. Recently, Ansh’s (Harsh Rajput) twin brother entered in the show, now we heard a huge drama will unfold when both the brother’s come face-to-face.

As per the current track, Karan (Harsh Rajput) felt heartbroken after Piya’s mother turned his wife Mansi (Kingkini Bhattacharya) and his child into wooden statues. Now in order to release them, he will need to turn Ansh’s wife Piya (Niyati Fatnani) and their child Munna (Kiara Bhanushali) into statues. Ansh will be dejected, when came to know about his brother’s evil plan. In the upcoming episodes, Karan and Ansh will come face to face and fight to save their family.

When contacted hazed-eyed hearthrob Harsh, he said, “Yes, we have shot an amazing fight sequence between Ansh and Karan. It’s the confrontation between two fathers, who is going to win only time will tell.”

Watch this space for more updates. 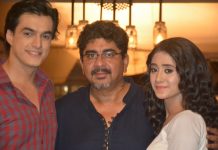 Mohsin Khan and family go out of the way to welcome...