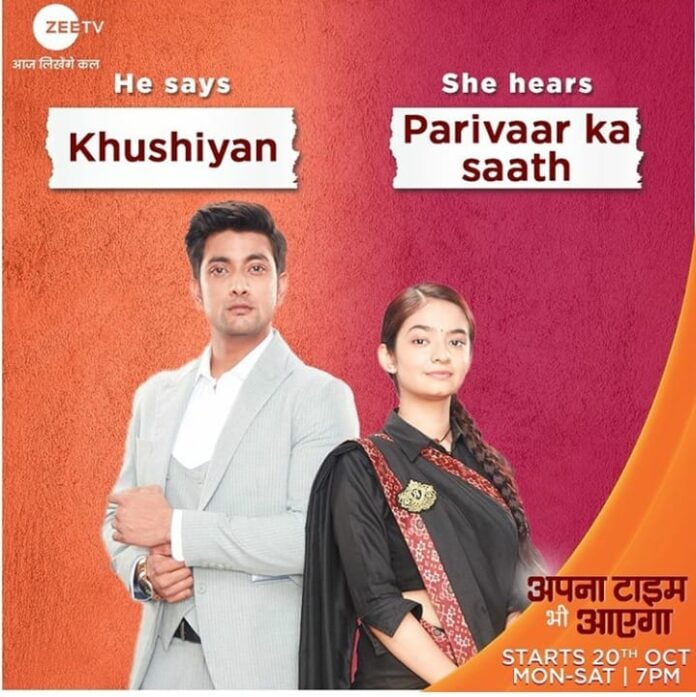 The episode begins with Rani notices fly in the food which servants taking towards dinning table. She recalls how Kumud warned her that Rajeshwari is very strict about cleaning and she already fired some servant for not noticing hair in the plate. Rani searches fly in every plate and thinks Rajeshwari will kill her if she saw alive fly in their food. Kumud signals Rani to move from there but Rani misunderstood her thinking she is telling her to sit and sits on the chair beside Veer.

Everyone shocks seeing that and stands there. Veer scolds her. Kumud takes her aside and asks why sit on the chair. Rani says she only signaled her to sit. Kumud says she told her to move aside not to sit. Rajeshwari comes there and asks why everyone standing and tells them to sit. Jay asks Rajeshwari about Nanthini. Rajeshwari thinks she told her to talk to Jay then why she didn’t come still. Nanthini comes there and Vikram says she is here. Nanthini sees Veer and recalls how he explained her to meet Jay just to respect Rajeshwari’s decision.

Jay gifts necklace to Nandhini and makes her wear it. She says it’s beautiful and thanks him. He says shayari. Vikram praises it saying he is so romantic. Kiara tells Veer to learn from Jay. Vikram says this necklace seems so expensive so Veer has to work hard to buy something like this. Veer says he will do it for Kiara. Rani throws her slipper towards fly but by mistake it hits Jay. Everyone shocks seeing that. Champa tells Shanti that Rani is dead now. Kumud thinks now no one can save Rani from Rajeshwari.

Rani says she throw the slipper towards fly, her intention was not to hit Jay and apologize to him and everyone. She thinks she made big mistake and moves towards Rajeshwari. She apologize to her again. Rajeshwari was about to slap her but Jay stops her saying she realized her mistake so let’s forgive her. Rajeshwari says she won’t forgive her this time and tells her to leave the house. Jay says they are from royal family and they should not mistreat any woman like this.

Rajeshwari says he is so well mannered that he is forgiving her for her crime. She says Rani does not deserve forgiveness from him. She says it’s her mistake that she hired her in the place of Ramadheer. Jay apologize to Rajeshwari and says tomorrow it’s mehanti function so why to spoil their mood and tells Rani to leave from there and continue her work. Dikvijay says this time Rani was wrong definitely. Rajmata says whatever Rani did is unacceptable and Jay handled the matter very well and Rajeshwari’s decision of choosing him for Nanthini is very good decision.

Vikram praises Jay’s tolerance. Nanthini says she is also impressed with Jay’s behavior. Rani brings medicine for Jay. He tells her to apply it saying he is in pain because of her. She sits on the bed and tells him to sit facing her. She notices the wound on his cheek and applies medicine on it. She tells him to close his eyes and puts the heated stone on his cheek. He shouts in pain and scolds her. Seeing Veer there he stops shouting at her. Veer apologize to Jay on behalf of Rani and says it’s not good habit to shout at someone like this.

He says swelling decreased and he will give ointment to him later. He comes out of the room. Rani says Veer has so many shades and thanks him for saving her. He drags her and pushes them her in front of everyone. Dikvijay asks what is he doing. Veer says Rani does not deserve to stay in this house and she is keep making mistakes only. He says he respects Rajeshwari’s decision of hiring her but she is not fit to replace Ramadheer and says before Rani does anymore mistake they should throw her out of the house and it’s just his suggestion.

Precap – Rajeshwari fires Rani from the job and tells her to leave the house with her brother.