The episode begins with Next day, Veer wakes up and sees Rani beside him in sofa who is sleeping in sitting position. Her college application form falls on him and he recalls how she told him that she gave break to her dream of becoming engineer but didn’t give up. She too wakes and gets surprised seeing Veer. He says they are still stuck in guest room and tells her to not shout and shows the lock she broke.

She says she will try to open it again but he stops her saying he will try and moves towards the door and tries to open it. Malini who came that side unlocks the door hearing noise but leaves from there thinking no one would be there because Rajeshwari told her that she allotted whole floor for them. Veer, Rani gets relieved that door opened. Veer tells her that no one should know that they spend night together in guest room but Malini sees them together and wonders what’s happening. Later, Rani brings flower vase for her but Malini ignores her then tells her to leave the room.

Rani realises that Malini is angry so she leaves from there. Malini’s husband asks what happened to Malini suddenly. Malini says she saw Rani coming out of the guest room with Veer and seems like they were together whole night there so she has to talk about it to everyone. He stops her saying she would have misunderstood and they can’t question anyone just like that. Vikram teases Veer. Veer asks why he didn’t came to open the door. Vikram says because of network problem he didn’t hear anything when he called.

He notices Kiara and tells everything which happened with Veer and Rani so she can hear it. Kiara scolds Vikram for lying to her. He says she can’t separate them no matter what. Rani collides with Veer. He scolds her for not submitting the form yet. She says she will do it. He tells her to do it as soon as possible. She says it was her dream to become an engineer since childhood and says already so much happening in his life and he too scolds her always.

He says like her he too didn’t forget the promise he made to Ramadheer and says he will handle Nanthini matter so she should concentrate just on her studies and gives his pen to fill the form. Malini asks Kiara that why her forehead is empty. Kiara says Veer is always busy with his work. Malini says she will make sure that today Veer fills Kiara’s forehead with vermillion.

Dikvijay informs everyone that tomorrow they can perform Nanthini and Jay’s engagement according to Priest. Jay’s parents say they don’t have any problem with that date. Rani wonders how to stop this engagement. Malini tells Veer to fill Kiara’s forehead with vermillion because they have to start the pooja. She gives a vermillion box to him. Veer hesitates to fill Kiara’s forehead and Rajeshwari stops him. 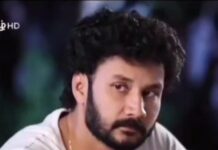