Colors TV channel has been going through tough times this year with the low TRPs of it’s shows.

After ending “Tantra” due to it’s lowest rates , now the channel had announced that it’s time to say goodbye  to other shows like “ Sitara” and “ Roop” .

A source from Colors has reported that the channel’s people are not so happy with the recent rates of “IMMJ” and it’s disappointing TRP.

As we all have expected , the show is flopping around since , Aalisha Panwar “ Tara” has left the show due to marginalizing her role .

Now we’ve got to know that , Sonarika Bhadoria who entered the show recently as “Netra” , will soon quit the show as well.

As the actress has not been creatively contented , with the recent developments of the show and with her character.

As reported in an entertainment portal; Sonarika has spoken to the show’s producers and makers of leaving the show ; and the decision was mutually taken , that they will let the actress quit within a month.

When the same portal buzzed into , Sonarika for clarification ; the actress confirmed ; “Yes I have put down my paper. All I can say that it’s a mutual decision between me and the production,” -Source India Forum-.

So now the pretty actress will be Portraying “ Netra” , for one more month only.

For how long the show will survive; after the final exit of two of it’s main leads ? and with the current TRPs?

Will Arjun and Nia be able alone to raise the TRPs again ? ; Or Mamta will surprise us with a new entry ?, and What will the makers do to spice up the show ?

With no doubt , the news of bidding goodbye to the show , leaving it’s fans in grief.

But We can’t deny that for two and half years  ; the show has succeeded in making a place for itself ; with  it’s new thriller plot ; which was totally different from the SaasBahu shows. 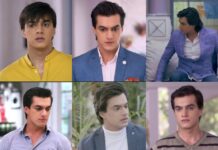