The episode starts with Bhatuk explaining Bondita what a cover is and Bondita wants to put it on the notebook. She is excited and happy.

On the other hand, Anirudh shows the building in which Heera Mandi girls will be working to them. Saurabh asks who will inaugurate it. Anirudh says that the girls will do only and asks them to pull the string. They do and a board with name of company is revealed. After breaking a coconut, Anirudh asks Saurabh to give laddu to everyone.

Bhatuk says that they are not pockets but compartments and explains that one is for pencil box and another one for tiffin box. Bondita is confused about the tiffin box so Bhatuk tells her that they have tiffin together at school. Bondita asks why she doesn’t have bag and why her books haven’t cover. Bhatuk replies that she is a girl and only boys go to school and become nawab while girls have to cook only. Bondita complains.

Meanwhile, Anirudh asks each of the girls how they are feeling. Suraya is so excited and has also dreamt that their clothes were sold out and everyone were asking her for more. Ramaya is doubtful but Anirudh assures her that they have to trust themselves. Bholi doesn’t speak much but Anirudh says that people who don’t speak much are great listeners.

Bondita goes to the room and is keen on making a bag like Bhatuk’s one. She grabs a saree cloth from cupboard and starts making her bag. Koyli omes and Bondita tells her what she is doing asking her to help. She starts helping Bondita. They make pockets too.

Anirudh explains that she should study whole heartedly. He starts the lesson but Bondita makes mistakes. Anirudh tells her how important the topic is. Bondita closes her eyes and forwards her hands. Anirudh asks why she has closed her eyes. Bondita apologizes and says that her eyes gets closed if she gets hit. Anirudh promises her that he will never rise hand on her, as a Guru and as a husband as well, no matter how angry he is.

To cheer Bondita, who is crying since she cannot learn, up Anirudh plays “Hum hone kamyaab” on piano and sings. Bondita sings along with him. Anirudh teaches Bondita to sing this to herself when she feels like she cannot do something. She laughs. Anirudh says that she will have fun studying if she consider studies as friend and tells her that it will be a friend that will never leave her side.

The next morning, Trilochan tells Binoy that everyone is tensed because a foreigner officer is coming, and he has already applied lots of rules. Binoy asks him not to worry about him: they will get friends with him. Anirudh says that some people only think about themselves. Anirudh doesn’t want to sit near Binoy so he asks Somanth to give him his seat. Binoy asks him not to since he is Anirudh’s father not son. Anirudh says that there is nothing like father son relation between them. They argue. Trilochan gets angry and refuses to eat. Bihari wonders who will bring calm now. Bondita walks in with Koyli.

Precap: Bhatuk tells Bondita that he will be expelled if someone from family doesn’t come with him to school. Bondita offers to go. At school, a presenter says that the greatest man alive Gandhi is here. Bondita gets excited. 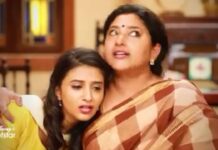 Raja Rani: Sivagami asks Sandhya to don’t give a statement against the goons. 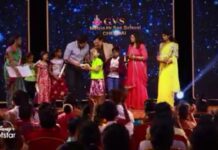 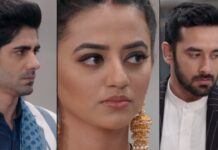 Raja Rani: Sivagami asks Sandhya to don’t give a statement against...