Today’s episode starts with Anirudh saying to Sumati that Bondita’s related decision only he can take. Bondita interrupts and asks to Anirudh if he meant by his word that he owns her and her mother can’t take any decision for her inspite she has given birth to her. Bondita cries and says to Anirudh that he misbehaved with Sumati and now she won’t talk with him. Roy’s and Sumati stands shocked. Ahead, Anirudh apologizes Sumati for his behavior.

Further, Sumati and Bondita spend time with each other. Bondita says she is angry with Anirudh for his behavior. Sumati says Anirudh is gem and she should respect him. Bondita says to Sumati that she has a big heart. Later, Bondita celebrates New Year and Sumati gets emotional thinking she is going to ruin her happiness. Trilochan comes and again suggests a plan to Sumati to escape from the house. He says to her to take away Bondita without letting Anirudh knowing about the same rest he will handle everything. Sumati agrees.

Next, Mini comes to Sumati and says she can share her worry with her. Sumati says she knows she loves Anirudh and urges her not to mistaken Bondita as she is innocent. Mini than thinks that she won’t let Bondita spend a happy life at Roy’s house as because of her only Anirudh got separated from her.

There, Binoy asks Trilochan if it is his master plan to throw Bondita out from the house. Trilochan says he don’t want to throw Bondita out from the house just want her habit to get cured. Binoy thinks once Bondita will leave the house he won’t allow her to come back to the palace. Here, Bondita stops Anirudh from touching the gift and says if he will touch them than he will show his rights on them too. Anirudh says he is sorry for his behavior. Bondita asks Anirudh to apologize to her mother. Sumati, Bondita and Anirudh shares a talk. Later, Sumati says to Bondita that they should play hide and seek with Anirudh. Bondita gets happy and thinks than where they should hide. (Episode Ends) 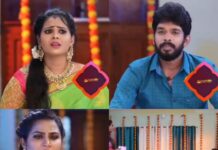