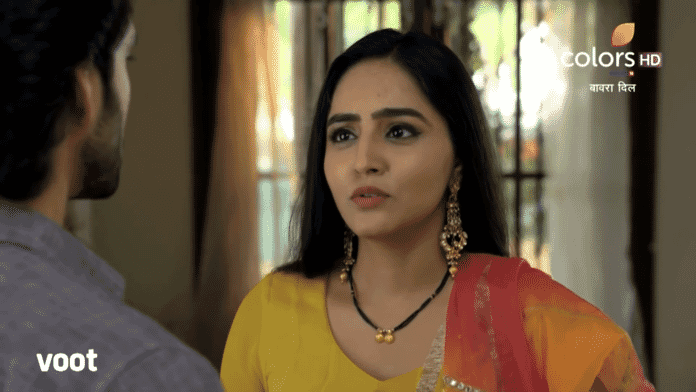 Colors TV show Bawara Dil is entertaining the audience with its intriguing storyline. Currently, Siddhi and Shiva are dealing with their inner conflicts and not realising their true feelings for each other owing to several past mistakes also Shiva’s slave like attitude angers Siddhi as she is a headstrong girl. Siddhi is trying to open Shiva’s eyes so that he can realise Akkabai’s dirty politics. Shiva decides to win Gothakori competition and in return he will tell Akkabai to call off Sarkar and Sonal’s wedding. There Narpat is also trying to provoke Siddhi so that Akkabai loses the competition and and fails to rule over Rudrait people but Siddhi will listen to him or not time will tell.

Previously its seen how Siddhi will stop Shiva from beating Kiran. She told him to question Akkabai instead, as she and her shameless son came over and told about Sonal’s marriage with Sarkar. Shiva got shocked to hear that. He refused Akkabai’s proposal but Akkabai fed him laddoo ignoring his words. She manipulated him saying Sarkar also deserves to get a second chance like Shiva. Siddhi got to know from Jalwa that Shiva is talking to Akkabai and Bhave came to inform Siddhi that Shiva gave his consent for Sonal’s marriage with Sarkar and its fixed now. Siddhi believes that Shiva can’t agree for this marriage as he cares for Sonal. She asked him to support her. Shiva planned something secretly to stop Sonal’s wedding. Sonal was shaken to know that her brother also broke her trust

In future episodes viewers will see interesting drama. Sonal will decide to end her life by consuming poison. Siddhi will stop her from doing so and will assure her this marriage won’t happen. There Shiva will decide to win Gothakori competition and in return he will tell Akkabai to call off Sonal and Sarkar’s wedding. But he will keep his plan a secret. Shiva will share it with Jalwa only. There Narpat will try to manipulate Siddhi to go against Shiva and Akkabai. Siddhi will try to find out a solution to stop Sonal from taking a drastic step.

Will Siddhi learn about Shiva’s plan?

All questions will be answered in the upcoming episodes.