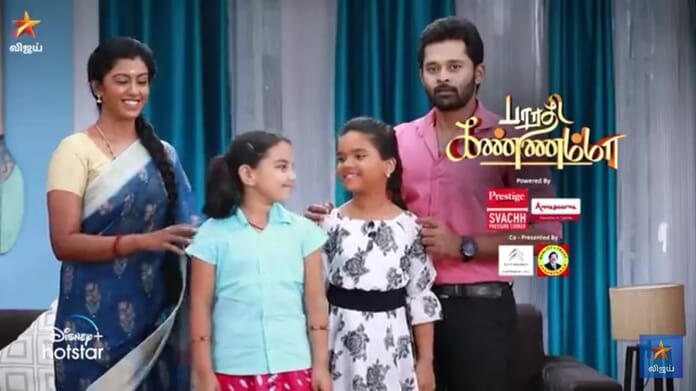 The episode starts with Kannamma questions Bharathi Is he wanna know anything else? Bharathi says to her that Hema used to hug him while sleeping. She don’t get sleep without him that’s why he tensed about it. Kannamma says to him she was awake before 5 minutes now she slept. He asks her to contact him if anything urgent she tells him she will contact Soundarya. She questions him Is he need she will wake her. Bharathi deny it and asks her to send her photo. She says to him its not good to take photo when she is sleeping. Hema wakes up.

Kannamma informs to him Hema is up. She gives the phone to her. Bharathi talks with her happily. He questions her doesn’t she search him at night? He says to him that she missed him a lot but Kannamma said story to her she slept. He questions her doesn’t she feel hot there without AC. Hema informs to him that they are sleeping in open terrace it’s so chill here. Bharathi shares to her that he asked Kannamma to send photo of her. Hema tells him she will make video call to him instead by saying she calls him.

Bharathi gets happy to see Hema there. He questions her Is he wake her up? She says to him that she will sleep again. He tells her that she used to sleep with him so he don’t get sleep without her. This house is empty without her. Hema questions him why is he crying for this? She will come there soon. She says to him that he will look good only when he is smiling. He smiles at her. She enquires him about Soundarya and Venu. He asks her to go and sleep.

Hema asks him to say her what did he used to say always. Bharathi mentions I Love you to Hema. Kannamma feels strange hearing it. Hema asks him to kiss her. Bharathi hesitates first and gives flying kiss to her. Kannamma turns her face. Hema waves at him and disconnects the call. Hema gives the phone to her.

Hema lays down to sleep. Bharathi stares his mobile. Venu questions her did Bharathi returned the phone to her? She questions him how will he give it he will feel shy so he places the mobile near her in morning. He asks her to check the call history. She says to him that he is brilliant that’s why he deleted the call history. Venu says to her that Bharathi doing so many things. Soundarya says to him that he may feeling they will tease him if we comes to know he talked with Kannamma.

Venu asks her to maintain the don’t know anything about it. She nods. Bharathi comes there Soundarya questions him where is he going in morning? He lies to her that he is going to meet his friend. Soundarya nods to her in sarcasm. She questions him Is he eat anything? He tells her that he will eat with his friend.

Hema questions Lakshmi Is she know little monkey jumping on bed song? She deny it. Hema asks Tulasi to give her phone to play it. Kannamma comes there and asks them to leave this phone and study Thirukural. Hema questions her what’s it. She explains to him and questions them how many Thirukural we have? Lakshmi mentions the correct answer to it. Hema gets surprise to hear it. Hema tells them that she only knew English well. Tulasi teases her. Kannamma teach them Thirukural and explains the meaning of it.

Kannamma says to them those who going bad to them will feel shame when they do good things in return. Lakshmi questions her why should she help the bad person? Kannamma says to her some people doing mistakes due to circumstances. Lakshmi is adamant in her point. Kannamma reaches them that they shouldn’t do bad things to others and treat them good. They nods to her. Kannamma tells her that she can study Thirukural till she stay here.

Kannamma says to her another Kural and explains it to her. Bharathi is driving the car Soundarya is following it in behind. Soundarya thinks that how did he lied to her. She asks her driver to don’t miss that car. Bharathi stops the car in front of nursery. He reminds how did he broke the plants in Kannamma’s house. He is checking the plants inside it. He buys two plant and places it inside the dicky. Soundarya thinks why did he buy plants. His car is not starting. Soundarya calls him.