She made her debut with Star Plus’ “Krishna Chali London” and soon became a household name. And now, post a successful stint, Bhoomika Mirchandani has joined the cast of Colors TV’s “Pinjara Khubsurati Ka”. The show is produced by Saurabh Tewari under his banner Parin Multimedia Pvt Ltd. This will be Bhoomika’s second show with the producer. The pretty actress had auditioned for a small role in her debut show “Krishna Chali London”, however, looking at her confidence, the makers made her the negative lead. She was praised for her performance in the show and her catch phrase “Ambe Maiya!” became quite famous too.

“Pinjara Khubsurati Ka” will also feature Jaya Bhattacharya in an important role, and it is said that the makers have come up with a very engaging and entertaining storyline for the show. As per sources, the shooting of the show will start from July 15. 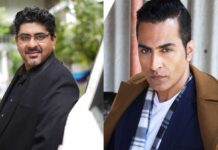