There, Aly asks Rubina not to bring coffee in between. Abhi and Rubina ask Aly to take a stand for right. Rakhi come and asks Rubina to tell who took her coffee. Rubina ask Rakhi to calm and let BB intervene. Arshi claims Rubina is acting like she is a captain. Rahul support Arshi. Ugly argument happens between Rubina and Rahul.

8:30 PM; Rubina confront Vikas and asks him didn’t he told them that Rahul’s girlfriend is his good friend. Vikas tell to Rubina and Rahul that during nomination they drag Rahul’s girlfriend. He said Rubina wants to nominate Rahul because of her personal grudge. Verbal argument happens between Rahul, Vikas and Rubina. Abhinav Rahul and say he threatened Rubina first that he can even bring personal stuffs. Rahul ignores Abhi.

9:15 PM; Rakhi cries and Sonali console her. Sonai asks what happened. Rakhi tell her that Eijaz is targeting her and it’s her mistake to become a captain. Sonali pacify Rakhi. She further goes to Eijaz and ask him to apologize Rakhi. Eijaz refuse too.

12:15 AM; Aly and Sonali shares a talk with each other. Aly says he respect Sonali’s feeling. Arshi joins them later.

8:30 AM; Sonali tells to Arshi, Vikas and Rakhi that she is attracted towards Aly and he is ready to welcome her and taking it easy. Rakhi and Vikas tell to Sonali there is no wrong.

8:45 AMl Rakhi tell to Vikas that Arshi is trying to play a game via Aly. Vikas says Arshi is palying dirty.

10:45 PM; Arshi says to Abhi and Vikas that Sonali’s half initial is Ali. Abhi and Vikas laugh. Arshi claim Sonali confessed her love to Aly. Sonali denies. There, Aly tell to Rubina about his talk with Sonali.

1:30 PM; Rakhi confess to Abhinav that she likes him as a good being, husband and friend. Abhinav hear Rakhi.

2 PM; Rubina reads the rule of ‘Captaincy Task’. In the Task ‘Mere Samne Wale Chajze Par’, team Rakhi and team Abhinav have to compete each other. Arshi, Rubina, Abhi, Vikas and Nikki plays in one team. Rahul, Rakhi, Aly, Sonali and Eijaz plays in second team. Team Rakhi have to block team Abhi’s side to make a wall.

Afterwards, both the teams make a task strategy. Vikas hides the camera. Arshi tell to Rubina that she is playing with the team.

2:45 PM; Rakhi says to Nikki to help her in getting his brother.

3 PM; Arshi tell to her team that she is playing with the team. Eijaz asks Arshi if she will play fair. Arshi says she wants to become captain thus will play with the team.

3:15 Rakhi says only she can touch camera.

3:30 PM; Nikki says to Rakhi that she already became captain thus, she should play with their team. Rakhi thinks over Nikki’s offer

Later, Aly and Rahul asks Arshi to play for herself as they don’t need anyone. Here, Eijaz says if their team will win than he will make Rahul captain. Task starts. Team Abhinav’s tries to build the window. Ahead, Rakhi wait for camera. Bigg Boss inform inmates that camera is already present in the house. Rakhi, Aly, Eijaz search for camera. Arshi announce Niki has a camera. Vikas asks Arshi with whom side she is playing.

4:30 PM; Rakhi hides Arshi’s tiger. She look for camera. Rakhi claim it’s mentioned none can touch camera other than her. Rubina asks rakhi to go and asks Aly as he went to store room.

5 PM; Arshi asks Vikas if he has hidden the camera. Vikas denies. 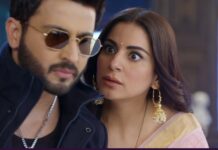