Day 23 at morning 8.05 morning wake up song plays inside the house. Housemates dancing for Ponmagal vanthal song and greeting to bigboss. At 11 am Aari talking to Rio about cooking team. He sharing to him that lot’s of confusion in cooking team it seems always crowded there but none know their actual work. Rio advised to him to hear captain order.

At 11.10 Anitha is laying on sofa Aari comes there and advise to her don’t be silent like this go and talk to him. He may be hurt so apologise to him. Anitha replies to him that it seems he is Influencing her. Actually she didn’t mean him but he takes it as personally she wished to apologise to him but he ran from her. So she feels lonely after that incident there. None listening to her. They discussing about cooking team with Somu. She says to him let’s do captain order nothing else.

At 12.05 pm Nisha is standing outside of dressing room. Anitha crying loudly inside. Somu noticed it too he runs in and informed this to Rio. They rushed to the dressing room and banging the room to open it. But Anitha keep crying there. Nisha says to her she will don’t mess it so open the door. Rio advise to Nisha don’t force her to do anything she will come out after cry her heart out. He leaves from there. Nisha says to Anitha no one is outside so open the door let talk in private.

Samyuktha and Shivani is also there. When Nisha forced her she open the door for her. She goes in and consoling her. Sanam standing outside and listening their conversation. Anitha complaining to Nisha that Suresh targetting her and picking her each word to target her. She didn’t mean to hurt him but he took her words personally. Its all happening in Village so she don’t wanna happen it anymore that’s why she conveyed it there. He takes that word and cornering her. Even Sanam mentioned him irrespectfully but he didn’t targetted her but her words hurted him a lot.

Everyone blaming Anitha for it but none questioning him. Nisha assures to her none misunderstands her they understand her point of view. She comes out with Nisha. Somu ask to her what’s her problem? She says to him everyone misunderstanding her and cornering her for him. None accepting her word and stand for her there? Rio says to her he agreed to her point of view but don’t say he is supporting Suresh. She knew well his mind plan and opposed to him many time. He is trying to say her words hurt him when she took his name as example.

Anitha replies to him doesn’t she has rights to say her opinion. If she needs she will use anyone name as example if its hurts him she is ready to apologise to him but he is running from her. After this incident none talked with her nor support her. Rio ask her to chill and go inside but she again stand in her point she too has rights to speak why did everyone stpping her. Bala says to her nothing is wrong in her words whatever she said in stage is correct and her intention also correct. You don’t need another one permission to say her opinion.

In one house half people will agree with you and half won’t so leave this and go on. Rio says to Aari she is misunderstanding again how many times he advised her though she is not changed. Bala talking to Suresh he explained to him that he intentionally avoided her because he don’t wanna poke his head in her matter again and get hurt.

Suresh again talking about it in garden area with Sanam and Samyuktha. She is saying to him that Anitha didn’t mean it so don’t take it to heart. Suresh replies to her everyone watching this show so it convey wrongly to everyone. Here Anitha saying she is standing in her opinion. She is scared of her image now and worry for her husband. Anitha is in confession room. Bigboss complaint to her there is no hi for bigboss today?

She smiles and say hi to him. She starts to cry sharing the incident to bigboss. Bigboss advised her to stand in her point at any cost. This game is to test her personality. Bigboss conveyed her husband message to her. She burst out in cry and said to biggboss she is missing him a lot. Its tough to take decision inside the house. Bigboss ask her to calm down and go.

At 2.50 Archana reading new task rules infront of Contestants. Its an Gold hunting task. Housemates should divide into four groups and hunt the gold from the dark place using lights. How much gold they keep it with them are the winners. They must keep it safe because other contestant can stole it.

Hunting started Sanam stopped Bala for bringing cloth inside. He goes in ignoring her after the task he lashed out at Sanam for disturbing him. He warns to her don’t poke her nose in everything. Samyuktha agreed with him. All housemates hunted gold. Suresh stoled Aari gold and shared with Aajeedh. Housemates trying to keep their gold safe from others.

Bala , Ramya , Aajeedh, Shivani trying to hide their gold in safe place. They hide it in the suitcase and changed the name tag. Sanam again poked her nose in Bals task he ask her to go. Shivani and Gabi is discussing about Bala plan.

Bala is sleeping before lights turns to off. Archana noticed it and inform to Velmurugan to wake him up but he didn’t seeing his loud sleep. Ajeedh go to wake him up. Bala says to him he won’t do it now he will do it morning. Suresh go to clean it behalf of him but Archana didn’t allow him to do it. Archana complaints that He won’t clean in sleep but can check out. Bala gets angry and starts to clean picking a fight with others. Rio starts to argue with him for using twisted words there. Lights turns to off. 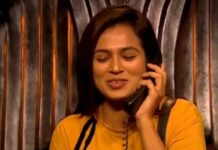 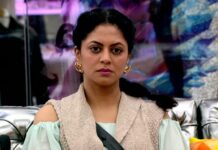