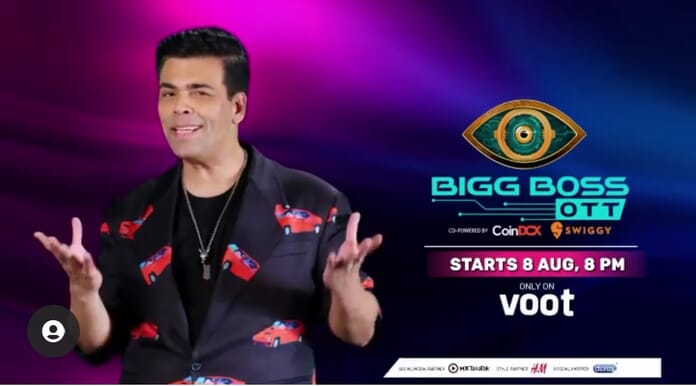 The inmates wake up to the song velle. Pratik and Nishant hug each other. Nishant, Divya, Shamitha and Raqesh dance in the Garden.

Akshara tells Millind that Moose was saying that she didn’t understand Divya’s game. She tells her whatever Moose has told her. Millind says that he don’t think he will leave her. Akshara says that’s why she is behind him.

Moose comes and lays behind Nishant. Nishant asks her not to break rules. He says he doesn’t like cosy and clingy things. He says that she talks with convenience. She says that just because he has no one to fight that’s why he is fighting with her. Nishant says that these acts will hurt. Moose says that he is still struck on the same thing. Nishant tells her that’s why hr said ome time is allowed.

Raqesh and Pratik with their connections are in the kitchen working. Neha calls Raqesh a Mumma’s boy. Shamitha asks Raqesh whether he want more. Neha says they look like married couple. Raqesh says they got married in the out side. Raqesh asks Shamitha whether she is like this on bed too to which they laugh. Neha asks Shamitha the same. She says it’s live streaming. Shamitha kicks him.

Divya reads out the letter and says the contestants that are going to participate in the game. She says that it’s the ladder game. They get steps from Bigg Boss and whoever gets more steps will be the winner. With every step Bigg Boss will send the letters to them. Nishant and Moose got the advantage yesterday and that’s why they got one ladder. Raqesh and Shamitha will watch out.

Pratik asks Moose what does she thinks about the letter. He says that they should read the letters.

Pratik says seven letters. Neha says that they should focus on the ladder. He says that everyone should get to read the letter. Nishant and Millind discuss the game. Millind says that he will match up with him.

Bigg Boss says that as an advantage they got the letter. Nishant takes the letter ahd keeps it in the ladder. They get one letter and the contestants rush to get it. Millind gets it and gives it to Divya. She hugs him thanking him. Neha tells Pratik that they won’t tear letter for Nishant and Shamitha. He agrees. Divya gets emotional reading the letter.

Divya says that she has read her letter to her mother and she has got the courage after reading her letter. She says that now she wahts to Fight. And the day she gets connection she will be eligible to play the game.

The sound comes. Bigg Boss says that it’s for Nishant. The contestants rush to take it and Pratik gets it. He gives it to Nishant and he hugs him. He gives the letter to Moose to read. Raqesh reads the letter for him. Divya also reads it. Nishant runs from there to the washroom. Neha tells Nishant that Pratik really loves him and asks him to remember it.

The sound comes again and the contestants rush to get the letter as Bigg Boss says it’s for Akshara. Millind gets the letter and gives it to Akshara. They keep the letter in the ladder. Moose hugs her. Divya hugs her as well. Nishant tells Moose whatever Divya told him.

The sound comes again. The contestants rush to get it. Bigg Boss says it’s for Neha. Moose says the most hated one in the country. Millind and Pratik catch it. Shamitha says Gaba touched it first. Divya asks Millind to keep it in the ladder but he gives it to Neha. Pratik ahd Neha hug him. Neha got letter from her husband. Neha reads the letter and gets emotional. Pratik and Shamitha console her. Her husband asks her to win the game but not lose OTT house. He wishes the house as well to which Raqesh says I Love You to Sameer. Pratik and Raqesh hugs him then Nishant.

Raqesh tells Divya that he doesn’t know how to pleasure her. Divya says that she wahts him to help her. Nishant says that there us something happening. Divya says that he likes Shamitha because she cleans bowls. Nishant funnily tries to provoke Shamitha n

The contestants rush to get the letter as the sound comes. Bigg Boss says it’s for Pratik. Pratik gets it and keeps it in the ladder saying that now it’s going to be a fair game. He gets emotional. Bigg Boss asks him to tear and throw the letter. He does as told and breaks into tears. Neha consoles him along with Shamitha. Millind also consoles him. Divya asks him not to cry if he has taken a decision. Nishant says that they have to tear someone’s letter. Pratik tells him mother that he loves her ahd misses her.

Millind tells Nishant that he will tear it if he gets it and he should also tears it. They plan how to block Pratik and get the letter.

The sound comes and the contestants rush to get the letter. Bigg Boss says it’s for Shamitha. Nishant gets the letter. Pratik tells Shamitha that she cah decide who gets it. Nishant gives the letter to Shamitha saying he wants to take some footage ae well. Millind says he is out of it to Nishant. Shamitha takes the letter from him and hugs him. Raqesh joins the hug. Shamitha reads the letter which starts with Om Namah Shivaya. She reads the letter ahd gets emotional. Her mother says that people are loving their connection and they are getting a lot of attention from the people. She asks to convey her regards to Raqesh and Neha. Shamitha kisses on Nishant’s cheek. Shamitha hugs Moose as well.

Bigg Boss says that the task for captaincy ends. As every connection has only one step ahd no one is the winner. And that’s why there won’t be any captain in the house. Divya thanks for fair decision.

Bigg Boss says that now it’s time for report card results and the 24*7 Live Audience are happy with their performance.

Nishaht tells Pratik that now they will become one and will beat Neha. Pratik says save my ass. Pratik stands with Moose and says their clothes are matching.

Moose and Nishant fight with each other as she asks him about his conversation with Divya. Pratik says that Moose is not wrong as she has just confronted him. Divya asks hin whether he talks infront of everyone. She asks hin to listen to everything. Divya says that she has talked with Nishant about the game from before. Divya says it shouldn’t matter to her. Pratik says Moose was not wrong and her confrontation was justified. Nishant says that it’s his thought. Divya asks whether she has only emotions. She says now she won’t let it go. She calls her an insecure bitch. Moose says that Pratik and Divya are still fighting and she was fighting with Divya and she always understands whenever he fights with her for Pratik. Nishant tells Moose that if she wants the connection to work then stop talking with Pratik or else he will walk out of the show.

Divya says that she doesn’t understand whether they are here to play the game. Divya says that she doesn’t feel she was wrong. She says if she talks about her character then it’s okay but if she calls her insecure bitch then she is wrong. Divya says if it was outside then she would have slapped her. Neha tells Moose that Pratik really loves her and is heart broken and because of her their friendship is broken. Nishant tells Millind that it is getting irritated ahd he can’t baby sit for her. Nishant says he can survive alone. Neha tells Moose that they are getting illusion and are relying on their connections.

Divya says as to how many times it will happen. She says that Nishant talks with everyone the same and she is already suffering a lot and leaves ftom there. Akshara hugs her. Divya says that she likes her but when she says such things it hurts.

Divya tells Nishant that she knows Pratik from four years. Since first week they have been that good couple and he doesn’t understand as to why Pratik is getting connected with her. Divya says that he plans it months before. She says that Pratik is trying to make him weak by using Moose. Nishant says he doesn’t understand why she is doing this. Divya says she is not doing it herself. Neha says that he knows Divya but still sitting her ahd consoling her from two months. Divya tells Nishaht that whatever they talk won’t come out in open. Nishant thanks her. Divya tells him that he is good at heart.