The episode starts with Venba praying to God. She tells whatever she’s doing is to save her dad. Otherside Yazhini comes across Ravi on the road. Venba phones Yazhini. Venba tells she left the city as she demanded. She requests to send the selfie to Saradha so that she can save her dad. She lies that she even changed her number so Kavin can’t contact her even if he wants. She accepted her condition to save her dad. She asks her to believe. Kavin comes there. He back hugs Venba. Venba signs him to be quiet as she’s talking with Yazhini. The latter says she believes her. She says she will keep her words up. She further tells that she (Venba )shouldn’t return untill her marriage happens with Kavin. Venba says she won’t. Yazhini cuts the call.

Kavin asks why she’s requesting Yazhini when he already got the photo. Venba says they can’t send the photo to Saradha as she will question her how she got that photo. Yazhini tells to Ravi that Kavin loves her but Venba tries to snatch him. Kavin tells Venba she will be his wife for all the seven lives. He gets romantic with her. Yazhini tells Ravi she made Venba leave the city through her chithi. She’s not like that but she can’t compromise Kavin for anyone.

Saradha is convincing a furious Kalai. The latter tells wherever he will go, they will question him that his dad is criminal. Kalai gets emotional saying he’s dream is to get a job in foreign company. Saradha assure Kalai that she will prove his dad innocent and remove the criminal charges put on Shanmugam. The company who have rejected him, will call him back and give tthe job.

Saradha is sadly sitting recalling Nandhini’s words. Deeba’s daughter comes to her. She asks when grand father will return home. Saradha assures her he will return soon. Then the kid tells her mom cried a lot due to Nandhini chithi. Saradha apologizes to her. The kid suggests Saradha to talk to Nandhini.

Saradha goes to talk to Nandhini. The latter tells she knows what she’s going to say. She tells she’s not going to listen to her. It’s better she sends her away with her husband. She will not change. She gives two options to Saradha either she allows her to live separately with her husband else she will keep troubling her. Saradha says she will never allow her to leave this house as she considers her as her own daughter. This will family will always remain together. Nandhini angrily shouts no. Saradha says she’s her favorite daughter-in-law. She says she looks beautiful in anger too and leaves.

Kavin and Venba are in pooja room. Venba gives aarti to Kavin. She applies vibuthi on Kavin’s forehead. 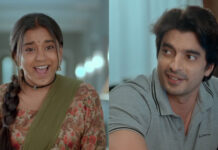