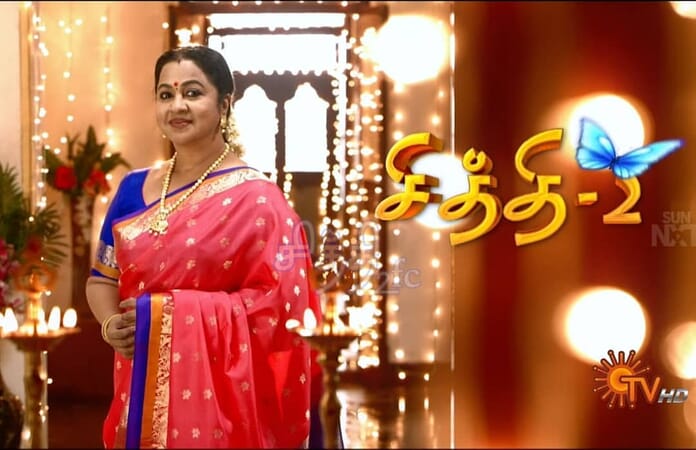 The episode starts with Kavin returning home. Kavin thanks Shivani for being with Venba the whole day. Venba tells Shivani to go to her house. Shiva goes. Venba notices that Kavin is tired, so she doesn’t question him about his project and tells him to have the dinner. Kavin says that they will have the dinner in the open and goes to fresh up. Kavin is hungry and etas the chappati fast. Kavin praises the side dish made by her. He asks Venba if she had dinner. Venba lies that she had and gives the remaining chappati to Kavin.

Later Shivani reveals to Kavin that Venba didn’t have dinner and was waiting for him. Kavin calls out Venba and asks her why she lied to him. He says that he realized what hunger is today. He didn’t have lunch as his project got rejected and he felt dizziness in hunger. Kavin adds that they should be together in whatever they do. He goes to cook for Venba. He finds tomatoes and breads and wonders what to make. He gets idea and makes sandwiches.

Kavin feeds the sandwiches to Venba. He tells that his project was stolen by his friend’s company and they’re currently doing this. Venba says that they should get them punished. Kavin says that he’s not affected by that, but Mallika appointed Yazhini as the CEO. He adds that he doesn’t have any problem in Yazhini being the CEO, but she is inexperienced and she can’t handle the company. That company was built with so much hardworking and it can run in loss because of Yazhini.

The next morning Kavin searches job. He goes to different company to attend the walking interview, but the guards send him back saying that he can’t understand the interview without any degree certificates. Kavin gets upset. He feels thirsty and drinks the tap water. Kavin, who passes by that side, notices Kavin and asks why he’s drinking the tap water. Kavin says that many people drink this water only. Ravi complains that Kavin doesn’t take any of his help. Kavin says that he wants to win the challenge against his mom without anyone’s help. Kavin shares that he’s unable to find a job without degree his certificates. Ravi says that he can arrange a job for him, but it’s not suitable for his educational qualifications. Kavin says that it’s fine.

Mallika and Yazhini come to the temple to meet Shivani’s mother, Sowmya. The latter recognizes Mallika as Venba’s mother-in-law. Yazhini corrects her saying that Mallika is Kavin’s mother only. Mallika seeks Soumiya’s help which surprises Soumiya. The latter asks how she can help them. Yazhini says that Venba seperated Kavin and Mallika and from that time Mallika is upset. They ask Soumiya to separate Kavin and Venba in return they will give her five lakhs. Venba comes there and sees them.