The episode begins with Harleen notices that Sarab and Meher fighted with each other and ignoring each other so she announces game and makes Sarab and Meher as captains. She says it’s boys vs girls and tells them to sit with their teams. Sarab tells shayari and asks Meher to reply his shayari. Meher sings “Kajra Re” song and dances with other ladies. Then Sarab sings “Hai Agar Dushman” song and hurts his hand. Meher stops him from hurting his hand further.

Everyone enjoys it. Meher notices Tarkash and Arti and gets worried for her. Everyone starts to dance and Tarkash’s daughter too joins them. Tarkash looks at her angrily. Arti notices that and stops her daughter from dancing. Tarkash’s daughter gets afraid seeing her father’s glare. Harleen says the competition was awesome. Jagga says everyone enjoyed it a lot. She says but they has to announce the winner. Jagga says Meher team won the competition.

Harleen signals something to some guy. Suddenly lights goes off. Using that chance Meher drags Arti with her and asks her to tell the truth to everyone for her daughter because if she missed this chance then she can’t help her again. Arti gets afraid seeing Tarkash behind Meher. Harleen counts from 10 to 1 and everyone wishes happy new year to each other. Tarkash wishes his wife and his daughter. Param wishes his parents and Karan. He asks his parents to kiss him. Harleen calls them for family picture and they clicks lot of pictures.

Param says he recorded something in his mobile and tells Meher to see it. Meher was keep noticing Tarkash’s behavior and thinks he is not leaving Arti alone for a second also. Harleen calls Tarkash and he thinks how to leave Arti alone. Param was keep following meher and asks her to see the clip. Sarab tells her to listen Param. Meher shocks seeing something in that clip and looks at Tarkash angrily. Param asks her that how is it.

Meher moves towards Tarkash angrily and slaps him in front of everyone. Everyone shocks seeing that. Meher says she slapped him so he can understand how it feels. Sarab tells Param to go inside with Tarkash’s daughter. Meher was about to speak but Sarab yells at her. Harleen scolds Meher for slapping Tarkash like this. Sarab says just because Meher doubting Tarkash that’s not mean she can slap him and asks what’s wrong with her. She says Tarkash is abusive husband and says he tortures his wife daily and says now he started to beat his daughter too.

Sarab asks why she is insulting Tarkash like this and asks her to apologize to him. She says she will keep make this mistake because it was necessary. She says like Arti there is lot of ladies who stays silent after tolerating abusive behavior of their husband’s just for her family. She taunts Tarkash and says Arti is silent but that’s not her weakness. Everyone talks about him. Harleen asks Meher that how she got to know about it. Tarkash says he will leave his job and this city if she proved him wrong then. Meher asks Arti to tell the truth.

Precap – Arti says she never met Meher before this party. 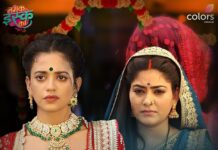 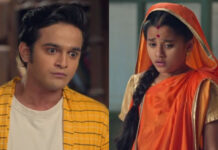