In today’s episode of colors television one of the popular show Choti Sarrdaarni, Sarab will get panicked to see an unconscious Meher lying on the floor. Harleen will try to wake Meher by rubbing her hands but to no avail. Sarab will call Aditi who will scold him for being reckless in sending Meher outside. She will ask to speak to Lalitha, without realizing the phone is on speaker, Aditi will call Lalitha irresponsible. Lalitha will cleverly hint that she is on speaker and Aditi will quickly lie she was talking to Bheem. She will instruct Lalitha to give an injection. Meher regain consciousness after that. Sarab will thank Aditi for being a Godsend. Aditi will stare at Gill mansion from inside her car and say to herself that only time will tell if she is Godsend or Yamraj.

Sarab will feed Meher and scold her for going to school in her fragile condition. When Param ask him why he is scolding Meher, Sarab start shouting at him saying its his fault. Param will start crying. Meher will admonish him for scolding Param. Harleen takes Param away. Harleen scold Robby for stealing Lalitha’s phone to spy on her. She will tell him its below their standard and ask him to keep it back.

Later Sarab will surprise Meher with a big baby cradle in their room. However Param will think its Sarab’s gift for him and declare that he will sleep on it from now on. Param will get upset and adamant when Sarab tell him its for the baby. Meher will smartly convince Param. Param talks with baby sweetly and before he could touch him he starts crying. Sarab will scold him for making baby cry. Param will get angry and upset as he didn’t touch the baby and says baby is acting. 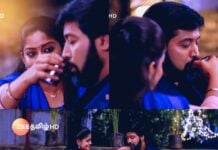