Episode starts with Suman and Shravan having an eye contact. Both remember many flashbacks where they spent good time together. Veer tells Suman how he is the one who saved him and he promised me that he will come to save me and you are officer so you will keep your promises right? Shravan says yes, I will, infact everyone should taunting Suman. Suman then thanks Shravan. He says captain Shravan. Suman says okay, thanks Captain Shravan.

After coming back home, Suman’s chacha chachi get to know that Shravan has saved Veer, they think of thanking him but Suman says I have already no need to do it again and again. They think what is all this we can’t even thank the person who saved our son.

Shravan and Suman both are driving and getting flashbacks about good old days. Suman has a chewing gum as she is frustrated with the memories. Then Suman reaches to Bikram, the lawyer handling his dad’s case. Bikram briefs her about the case, then he asks if Suman has to go somewhere, Suman answers yes she needs to go to cant.

Bikram says you were on holiday right? Suman says yes but the practice of working doesn’t go so i volunteered. Bikram says wow you handle so many things, how will you give space to someone you love then. Suman says love is like respect it happens with time. Suman then says she knows he is talking about himself. Bikram says he is really impressed how she is straightforward and he hopes they know about each other more in these vacations. Suman says yes, but dont hope too much. Then she gets some flashes and leaves.

Shravan is in cant and is talking to the head. The head is saying I know about your stories and daring attitude. Suman enters and the head introduces them both. They both shake hand as part of formality. Then Suman also gets to hear some of Shravan’s daring stories from head. Then she asks how did he join army. Shravan says I fell in love unexpectedly with my country. The head says yes that is the real motivation. Then the head passes Suman the report of Shravan.

Suman suggests MRI and physical therapy. The head asks Suman to give some medications too. He then leaves. Suman is prescribing medicines to Shravan. He says it’s not shocking that you are a doctor but it was shocking when I heard you are taking interest on why I joined army. Suman says I know the answer tk that, you just want attention and you want to show off. Shravan says you should have been a better judge, you judged me without even knowing anything. Just then Shravan get’s a call and it’s his dad. They talk about the ongoing case and Shravan talks in a taunting way.

Suman gets irritated. Shravan reminds Suman of the court date. Suman says I knew that, I guess like your case, your lawyer is weak too that’s why he informed you so late. Suman then gives the prescription and says do the MRI, positively. Shravan is leaving when he sees the tank he gifted Suman earlier. He is surprised Suman still has it. Suman notices and calls a peon and gives him the tank and says it’s no use to her so take it.

Precap – Suman is dressing Shravan’s wound and is careful. They both get nervous. Shravan says he needs to shift so not let this medical procedure delay. Suman says he will do her duty and doesn’t care about his plans. 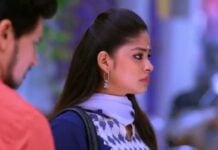