The Episode starts with Shravan saying Suman isn’t able to come, she has apologized. Beena says its fine, ask her to work hard. Ramesh says duty always first. Kanchan says yes, Suman was excited for this, we shall celebrate. Beena cuts the cake. Everyone celebrates. Shravan and everyone dine.

Devraj likes the food made by Bunty. Avni jokes and says Kanchan is here. Beena thanks them for coming. Suman comes home and hugs Beena. She says happy birthday, I should have come first, I came last. Beena says Shravan told us that you had work. Suman says sorry. Devraj says we had dinner. Suman says I got icecream for you.

Kavita says we will have it. Kanchan asks them to sit, she will get icecream. Suman holds ears and apologizes to Shravan. Later, Suman asks are you upset, I m sorry. He says no, I know duty comes first and then families. She asks why do you behave rude. He says I feel sleepy, I m tired, good night. She thinks I will convince you tomorrow. She smiles.

Its morning, Suman takes breakfast for Shravan. She looks for him. She doesn’t see him. Devraj likes the parathas. He hugs Suman and says you have made tasty breakfast. He gives her shagun. Suman says thanks, I will try something else, where is Suman. Kavita says he went in the morning for sports practice. Suman gets sad.

Kanchan says I was tensed, you did it well Bunty, thanks. Bunty says don’t thank me, I m your friend, right. She smiles. He asks about her job interview. She says I had to say it, I got the job. He says I knew it, you will get it, you are so smart, I want a party. She says so you praised me. He says its true praise. She says fine, done, I will message the place and time. He says I will get a gift for her, I m getting a date feeling. CO says very good Shravan, keep it up.

He holds her hand. She gets hurt. He asks what happened. She says I got a burn while making the breakfast, you didn’t even taste it, don’t worry for me. He says we will get dressing done, come with me. Devraj says my friend Vishal had called, he said his son Abhishek is coming for business. Kavita says he will be of Shravan’s age. Devraj asks Rajender how will be Abhishek’s alliance for Avni, once Ragini comes from Maayka, we will talk to her, its no harm to talk, we can take Suman’s advice also.

Kavita asks is Avni ready for marriage. Rajender says yes, if Devraj decided, then its done. Devraj says then its done. Shravan does aid to Suman’s hand. He asks who told you to make parathas. Suman says its not easy, everyone praised me, Devraj hugged me, I wanted to hear praise from you. He says I was practicing since morning. She asks him to have the paratha. He says I will have it later. She says successful marriage is one where husband listens to his wife. He eats the food. She says you know my work got increased, it can’t be an excuse to break the promise. She smiles. 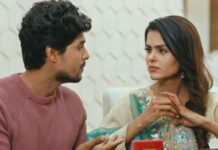