As we know that the team of Yeh Rishtey Hain Pyar Ke has already started their shoots and recently the team went to shoot the sequence in the beautiful locations of Bhuj and Kutch.

The plot of the story is such a way that Mishti who is the cousin of Naira Singhania who helped Naira in Yeh Rishata Kya Kehlata Hai to find her love is now waiting for her prince charming but this time she has so many questions in her mind related to relationship. So with so many queries, how she will find the love of her life; the story will revolve around it.

The team josh is High and is continuously trying their best to catch the attention of the viewer’s thus the makers have roped the famous rapper Badshah and the other female characters of Star Plus shows to promote their show.

Shaheer Sheikh and Rhea Sharma starring Yeh Rishtein Hain Pyar Ke has fetched 10pm slot on star Plus replacing the 3yrs long show Ishqbaaz. The show will launch its first episode on 18th March. The two promo of the show is out till date and it looks promising. In both the promo they highlighted ‘Ek Hi Toh Life hai Yaar’ and along with that views on marriage is shown. 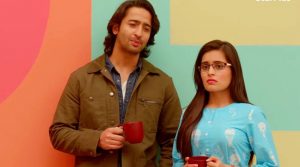 In one video Abeer (Shaheer Sheik) and Mishti (Rhea Sharma) song sequence is there where at the end Abeer questions Mishti “you have one life do you really decide your life partner over one cup of chai”?

Check The Promos Below!

After the promo was out the fans just couldn’t hold their excitement more to watch this spin-off who has a new concept and a new Jodi in the form of Mishti and Abeer. The show has recently done its media launch too. So how excited you are for this upcoming show, do let us know in the comment section.