It’s in trend;  TV actors and actresses are exploring the musical world by getting featured in a music video. And along with that fans are also getting a chance to see their dream pair on-screen together. Right from Hina Khan, Arjun bijlani, Surbh Jyoti, Siddharth Shukala, Mohsin Khan to Shivangi Joshi and few others; TV celebs are flaunting their talent in music videos too. Thus, recently Shaheer Sheikh and Jennifer Winget fans took their twitter handle and demanded to cast the duo together in a music video as, they are their dream pair.

Under the hastag #MusicVideoWithJenHeer fans demanded their wish and trended the hastag with the maximum amount of tweet quoting why Jennifer and Shaheer are perfect together.

Kumud x Abir one of my favorite crossover 😍#ShaheerSheikh#JenniferWinget #MusicVideoWithJenHeer

We want them together…..
They would look adorable….
No other couple would be cute , hot and awesome front of them…..
They would be only the one couple looking cute and adorable in entire ITV#MusicVideoWithJenHeer https://t.co/r3Q0qVESAx

Jennifer winget and Shaheer sheikh..
Together they would look just awesome, amazing and hotty🔥🔥🔥#MusicVideoWithJenHeer

The BESTS in their Field ❤❤
Or can be crowned as the KING & QUEEN OF ITV❤❤
A dream Pair for every ITV fan 😍
Would really love to see them together in a show if not,in a music video❤
Haven’t seen any of them in a MV before.
Sorry guyz couldn’t join😔#MusicVideoWithJenHeer pic.twitter.com/fcTGjHUqhU

Well, there is no second thought if Shaheer and Jennifer come together, they will burn our screen with their sizzling performance. Both are outstanding actors and have proved their worth in their respective shows. Thus, jodi of Jennifer and Shaheer can create magic on-screen. And we don’t mind if they get featured in romantic or intense music album.

On work front, Shaheer Sheikh is currently playing the character Abir Rajvasnh. For his role, actor each day gets tons of love from the fans and followers. But recently, show going-off air news, disappointed the loyal viewers’ of the show. Fans under the hastag #GiveYRHPKExtension are demanding for show extension. Meanwhile, actor Shaheer Sheikh in talk with leading daily confirmed about Rishtey going-off air. Also Sheikh revealed that he will soon be seen in web series post Rishtey.

Coming to Jennifer Winget, the dazzling diva was last seen in Sony TV show ‘Beyhadh 2’. Actress impressed the audience playing the character of Maya Jai Singh in the show.

Share with us in the comment section below if you too want to see Shaheer and Jennifer in a music video. 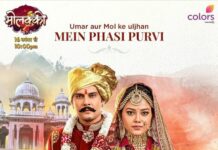