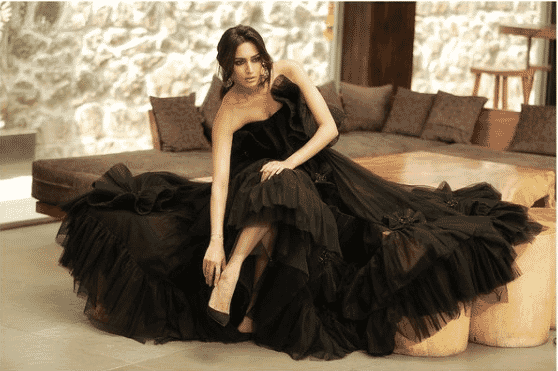 Erica Fernandes knows well how to pull fans attention. The gorgeous diva always makes jaw drops with her antics. Be it acting or fashion, Fernandes never fails to awwmaze her stans. In the recent past, Erica took her social media and post her pictures in black off-shoulder full gown. Hearts out there melted seeing the flawless beauty of Erica in black. Pulling fashion gorgeously is not everyone’s cup of tea. But from experimental to latest; Fernandes carries each look with ultimate perfection.

Her expressions always adds more value to her radiant appearance. The latest post of Erica is absolute breath-taking. Messy hair and minimal accessories complimented Fernandes’ chic look. You just cant’ take your eyes-off from her.

Check out the picture here!

On work front, Erica Fernandes is playing the role of Sonakshi Bose in Sony TV’s Kuch Rang Pyaar Ke Aise Bhi 3. This is the third time diva is reprising the role. And no one can deny every time it was better than the other. Sonakshi’s character is written nicely. Erica’s performance makes Sonakhi more relatable and significant. When actresses of Erica’s age hesitate to play a mother on-screen, diva is breaking the ice by playing the role of a mother flawlessly. As a mother young actress is setting a benchmark for the upcoming talent. Fernandes is proving playing a role of a mother is challenging but it has a potential to make you stand out in the crowd. This is the reason Erica shines out in top actresses list. She hasn’t restricted herself to only play bahu or ideal wife; Erica is surely bringing difference by taking the role of a mother. As Sonakshi, actress keep sharing reels with her on-screen kids. The reels and stills are treat to eyes. Do tell us if you adore Erica as Sonakshi.

Follow us for more TV news, spoilers and latest update.