As the rumour mills run high with the news of exit of Komolika for the reason that Hina Khan is offered a role in Vikram Bhatt’s film. To continue her Bollywood aspirations, Hina agreed for the film. However, Komolika is an important character because after Hina’s entry, the show has gained immense popularity. It not only tops the chart list in most watched programs online but has gathered great TRP’s for the show.

The makers is trying to keep the interest of the show intact. Though not directly but the producer, Ekta Kapoor has hinted a new and important entry – Rishabh Bajaj. Have a look at her new instagram post.

The time has come ! To say bye to @ronitboseroy as d iconic mr bajaj ! N d search for d new one@begins! I have cast ( n not ‘ casted’As someone told me) Ronit in many roles but this remains our most iconic one together @iam_ejf @the_parthsamthaan @realhinakhan @poojabanerjeee @subhavi all have been perfect as anurag Prerna komo Nivi .. willl bajaj match up( hmmmm)

She clearly give clue of appearance of Mr Rishabh Bajaj and a hunt to find a new one. Now, let’s check out who can fit in this intriguing character.

Mr. Bajaj played by Ronit Roy was rich, ruthless, handsome, middle aged business who went on to help Prerna and eventually fell in love with her. He married her later in show.

For such character, few names popped in our head starting from Barun Sobti who played similar kind of role in Iss Pyaar Ko Kya Naam Doon? season 1. He was iconic Arnav Singh Raizada. Barun has experience of such roles and he can be a good choice for this.

Our thoughts took us to Jamai Raja’s fame Ravi Dubey as Siddharth Khurana. Ravi oomph a certain aura around him which is rich and decent. There was a time when every saas wanted a Jamai like Siddharth Khurana.

More to it, our mind struck with one more name, the actor who portrayed iconic Mann Singh Khurana’s role in Geet Hui Sabse Parayi. He is none other than Guru Chaudhary. The character was very much like Rishabh and Guru did it with excellence.

Ashish Sharma is another choice of ours as his versatility in acting is incredible. Though he has never done any such kind of role in past but his perfection in his art is remarkable.

Although, there are other names like Shaheer Sheikh, Avinash Sachdev, Vivian Dsena, Karan Wahi, Gautam Rode, Karan Kundra, Sourabh Raaj Jain and more but most of them are busy with other contracts at this point of time. What do you think? Who could be next Rishabh Bajaj? Let us know your choice in comment box.

For more, Let’s Get Buzzing. 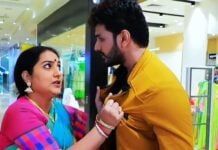