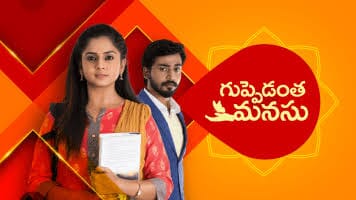 Episode begins with Mahindra and Jagathi sitting on sofa and talking about things. Vasudhara comes there and tells them about the complaint she filed about her lost money. Mahindra and Jagathi encourage her and appreciate her move. Vasudhara tells them that Rishi helped her in this and also tells them that she is sure about getting her money back as the dgp is none other than Sireesh. She tells them she is both happy and sad to meet him. Jagathi asks her the reason to which she says she is sad because of madhavi’s friendship with Sireesh she had to go through a lot in the family and remembers about how her family accused her. Jagathi says she has said about the same before and asks her to be strong. Vasudhara gets worried thinking about what will happen if her brother in law comes to know about it. Jagathi says that they should think about it and asks Mahindra to tell Rishi to stay careful about this Rajeev to which Mahindra says they don’t have to tell him. Jagathi still insists and asks him to leave. Mahindra tries to stay but she tells him that even she wants him to stay but he can’t because he should be staying with Rishi. Mahindra leaves from there. Vasudhara thinks that they both are together emotionally still apart.

Mahindra is waiting for Rishi to come in the garden. Rishi comes and tells hin that he would have had his coffee instead of waiting for him to which he says there is happiness in sharing with the one we love. They see vasudhara coming. Mahindra asks about the complaint to which she tells she should be thankful to Sireesh, Rishi remembering about her convo with Sireesh leaves from there before she thanks him.

Vasudhara is sitting with her mates. She thinking about Madhavi’s words goes in search of Rishi. She enters his room where he is thinking about her words. Rishi thinks she is his imagination but later gets to know she is not. She thanks him. Devayani comes there and asks her as to why she is here. Rishi backs Vasudhara and lies that she is here for books. Devayani warns vasudhara to follow the rules of the house and asks her to not roam in the house.

Madhavi opens the door to see Rajeev. She tells him that her husband is not inside and aaks him to leave. Rajeev tells her to ask vasudhara to stop going to police station otherwise her father will be on bed. Madhavi tells him that vasudhara does what she wants to and closes the door on his face. The Screen Freezes On Rajeev.