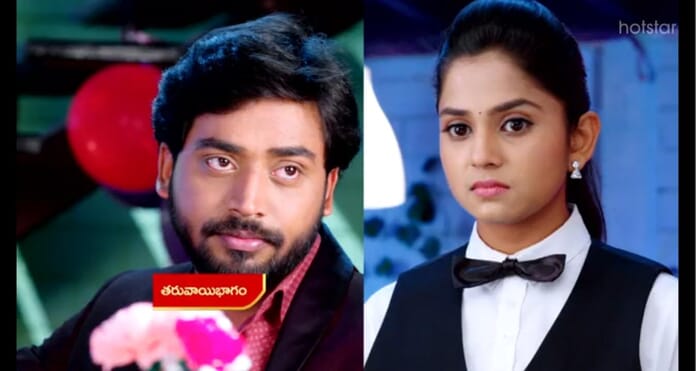 Star Maa’s popular hit show “Guppedantha Manasu” is all set to engage its audience with its storyline. The audience are in love with the unique storyline and the lead couple “Vasudhara” and “Rishi”. In yesterday’s episode, We saw Rishi thinking about Vasudhara’s words and what Devayani said. He wonders as ro why she thinks that he went because of her. Vasudhara sends the pic of the bouquet and thanks to him for coming. He calls her ahd asks her as to why did she send the bouquet to which she says that it is beautiful and that’s why sent it. Dharani questions Rishi which makes him upset. She tells him that Vasudhara has influenced him to go to the Party. Later Mahindra asks Sireesh to drop her at the college which Rishi sees and gets upset.

In today’s episodes, we will get to see Rishi seeing Sireesh and Vasudhara get down from Mahindra’s car. He wonders about it. Rishi stops Vasudhara and says that she must be telling everyone that she has convinced him to come to the party. Vasudhara asks him why would she say that. Rishi asks her to not talk about anything and she asks him as to what did she do. Jagathi stands in the same place where Rishi congratulated her. She tells Mahindra that it’s a special place for her. Mahindra gestures Vasudhara who remembers his words. Rishi comes there. Jagathi thanks Vasudhara for convincing him to come to the party. Mahindra asks her whether she got to know where her happiness lies. Rishi says that he hasn’t forgotten anything. Later Rishi tells Mahindra that the hurt the heartfelt can never be wiped out and asks him not to think that he has changed his views about Jagathi.

In the upcoming episodes, we will see Vasudhara telling Sireesh that someone has requested her to do something who has always helped her and stood by her. But the request he has made for her is very hard to fulfill. Sireesh is about to say something when Rishi comes there and asks them about it. Sireesh says that he is giving a solution to Vasudhara’s problem. Rishi asks her about the problem. Vasudhara looks at him shocked.

What will Rishi do? How will Vasudhara bring Rishi and Jagathi closer?

Keep checking this space for the latest updates of your favourite Telugu shows.