2020 was a year full of unpredictable things, but it taught us the value of life and made us realise the difference between need and desire. Popular TV actor Shivin Narang agreed to it, and said, “2020 was the year when I learned a lot of things, like knowing myself better and spending time with myself. Be it 2019 or even before that I was always busy with my shoots, and then last year I got to spend good time with my family and I learned a lot of things, though they are not big things, they were the ones I have never tried before, and it was an achievement for me.”

“There were so many emotions that we went through, there was a fear because of the pandemic as I have my parents at home and then work was also suffering, this thought ‘what will happen next?’ was always there. These are some emotions that have helped me grow as a person and as an actor too. So whatever it was I have accepted 2020 as a positive change for me. And in 2021, I am more clear about what I want and how I want,” he added.

With the pandemic and the consequent lockdown last year, OTT platforms came as a big rescue as TV and film shoots were stopped. Expressing his views on digitalisation in the industry, Shivin said, “I remember as a kid, we only used to watch TV and film, and then came the social media and then the web. It is something that people need to adapt and adopt, and it’s here to stay.”

“As an actor, or even if you are not an actor, with digitalisation you can connect to more people. For eg., during the lockdown, my show ‘Beyhadh 2’ went off-air, but it was still running in Arab countries and it was a huge hit there. So as an actor I feel because of OTT and digitalization you have more opportunities. There is a lot of content coming up, while earlier it was just films and TV,” the “Internet Wala Love” actor added.

But does it make it confusing? “These days there is content for every field, be it web, films, or TV, but people are mostly spending time on social media, so the differentiation in what they are watching is a little confusing because everything is there on social media. Earlier you knew that you are watching TV or film or web series, but these days the screen time has increased so viewers can’t distinguish between what they are watching because everything is there in the web world,” he said.

On the work front, Shivin shared that he is in talks with a couple of projects, and added, “In 2020 I did not start working because I have parents at home. But in 2021, with the vaccine coming, I have some things on my mind and I will resume work shortly.” Barrister Babu Spoiler: Manorama will lash out at Bondita 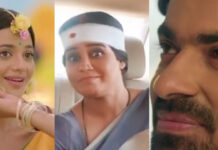