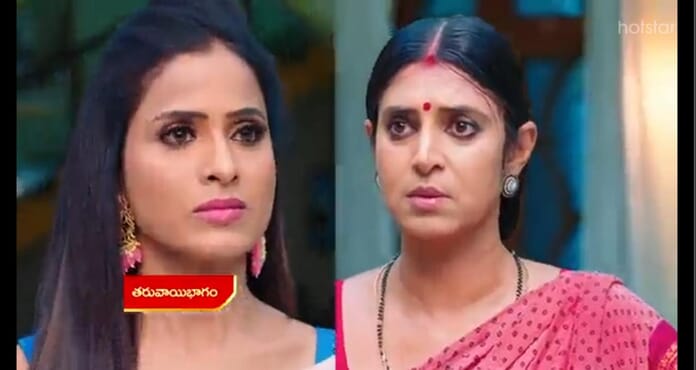 StarMaa’s popular show Intinti Gruhalaxmi is all set to engage its audience with its interesting storyline. Tulasi, Nandu and Lasya are the main characters of the story while Tulasi is admired for her patience and her way of dealing with betrayal and problems. In yesterday’s episode, we saw Lasya telling to Nandu that they don’t care for him and asks him to leave them. Prem comes there and argues with her. Tulasi comes there and asks him to stop arguing with people who don’t understand anything. In their, house Lasya asks Nandu as to why can’t he just live his life with her instead of craving for his parents and says that he has her hence they should live for each other. He says that like every son he is craving for his parent’s love. Lasya says that he is behaving like only he has parents and no one else does. Nandu asks her whether he should leave all his family and become an orphan like her. She emotionally manipulates him. Later Baghya and she devised a plan to ruin Tulasi’s Life.

In today’s episode, we will get to see Nandu asking Parandamaih for his forgiveness for everything he has done. Parandamaih asks him whether he can fix Tulasi’s ruined life. He then asks him whether he can leave Lasya and come to Tulasi just like he has left Tulasi for Lasya. Nandu gets upset. Ankita tries to bring Lasya home by manipulating but Prem stands against her and tells her that he will never forgive Nandu. Later Ankita calls Lasya and tells her what happened. Lasya says that she will think of a way to come into the house. Shruti confronts her of planning against Tulasi. She threatens her that she will tell her to the family.

In the upcoming episodes, we will see Tulasi driving the bike when a drunk Nandu comes there. He falls on her bike. He shouts at her that everyone does mistakes and even he has done a mistake and for that Parandamaih behaved as if something terrible happened. Tulasi asks him to come so that she can leave him at his house but he denies it. Tulasi brings him to Lasya’s house and makes him lay on the sofa. She is about to leave but stops seeing Lasya.

What will Lasya do? How will Nandu react when he comes to know about his behaviour?

Keep checking out this space for the latest updates of your favourite Telugu shows.