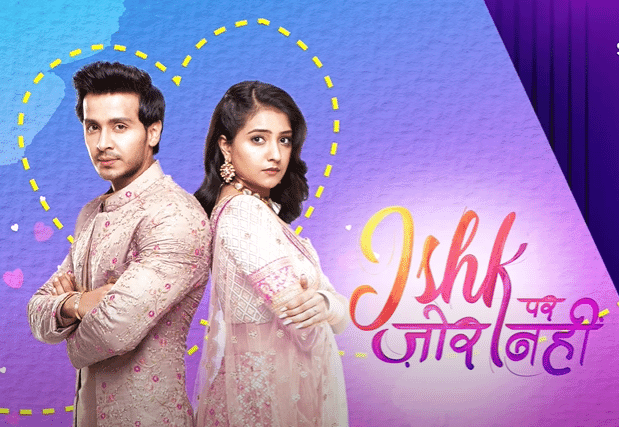 The episode begins with Ishqi saying I had called Suraj, he is out of the city, he asked me to tell the doctor about the medicines. Doctor says these medicines are wrong, the patient is weak. Ahaan says do something to make her fine. Doctor prescribes medicines. He leaves. Ahaan thinks Savitri’s life fell in risk because of Dadi, even then she has forgiven her for our sake. Ishqi says sit with her, I will get the medicines. Ahaan cares for Savitri. Dadi calls Ishqi’s office and asks did Ishqi come. The man says no, she took an off. Dadi asks Kartik did you talk to Ahaan. Kartik says no, tell me if you have any work. Dadi says no, I m worried, don’t know what’s happening there. He asks her to chill, Savitri is Ahaan’s mom, not any contract killer. She asks do you know anything, she is

a dangerous woman. He goes to get water for her. Dadi calls Ahaan and says I m worried for you, Savitri can do anything. Ahaan asks what can she do, she has fainted, all thanks to you, you spiked her coffee, she has severe side effect, I m busy, I have to give medicines to mum. He ends call. Ishqi smiles. Dadi thinks I have to do something, I can’t sit silent. Ishqi says I will apply the balm to her.

Ahaan says I will do. Savitri gets conscious and sees them. She smiles and says you had to worry because of me, I m better now. Ahaan says doctor said you needs rest, you should have told me if you aren’t well, if anything happened to you, then your partner would have sued us. She says don’t worry, staff is there to take care of me, you may go home. Ishqi says we will go when Suraj comes. Ahaan says we will go when we want, don’t think we care for you, we would do this for anyone. Ishqi says these are your medicines. Ahaan asks will you give it on an empty stomach. Ishqi says I will go and get some food. Riya says how didn’t Ishqi call me till now. Dadi comes to the cafe and says I have to talk to you. She keeps the reports. Ishqi brings the food and feeds to Savitri. Ahaan says I will get water.

Ishqi says everything is getting fine with time. They hear Suraj coming. Ahaan says Ishqi, we shall leave now, Suraj has come. Savitri says wait. She gets up. Ishqi asks what do you want. Savitri gives her a gift. She says its nek for you. Ishqi says no need. Savitri says I m giving this to my bahu, Ahaan doesn’t regard me his mum, but I regard him my son and you my bahu, its your right. Ahaan nods to Ishqi. Savitri blesses Ishqi.

Ahaan and Ishqi come home. She says I like cute Ahaan, I felt love for you. He says thanks for being my support system. She says I m always with you, lifelong, I won’t go away even if you say. He says I have to talk to you now. She says we will talk tomorrow, take rest now. They see Riya. Everyone looks on. Kartik says I was calling you since long. Ahaan says my phone was on silent. Kartik says its too late now. Ishqi asks what’s the matter. Riya says sorry Ahaan, I can’t hide it more, I can’t take more stress in this state, we should tell everyone, especially Ishqi. Ahaan says listen to me, not now. Riya asks then when, my dad is finding an alliance for me, I m stuck in this situation, sorry, I have to do this, I have to tell them. Ahaan says please don’t. Riya says I m pregnant, and this child’s dad is Ahaan. Ishqi and everyone get shocked.

Raj and Sonu come. Riya says its true, the reports are the proof, I am carrying Ahaan’s baby in my womb. Ishqi cries. Riya cries and says I know this should have not happened, but it happened, Ahaan was drunk on our engagement night, I should have stopped him, he was taking Ishqi’s name, I felt weak, I have always loved Ahaan, but unfortunately Ahaan loved Ishqi, I got selfish, I wanted to live some moments before going away, then I realized that I m pregnant, whatever he did with me, I can forgive him, but why shall my baby suffer. Dadi acts and scolds her.

She asks what’s the proof that its Ahaan’s baby. Riya asks why are girls asked for the proof, it was our mistake, why am I punished alone, because I am a girl. She thinks Ishqi takes a stand for women rights, come on Ishqi, take a stand for me. She says really sorry Ishqi, I know Ahaan and I have hurt you a lot, I didn’t had courage to face you, when I got to know that he didn’t tell you anything, I realized that he is cheating you now, he isn’t honest with you. Ahaan thinks sorry Ishqi, I wish I had told this to you before. Ishqi looks at him. Dadi says I know what’s Ishqi going through. Chachi says Ahaan, you did wrong with Ishqi, I had promised her Maasi, what will I tell her now. Dadi says Ishqi is in shock, I can’t force you to stay with Ahaan now. Ishqi cries.

Precap:
Dadi says Ahaan, we have to bear the price of your mistake, by bringing Riya home. Riya shows Ishqi and Savitri’s video. Dadi asks Ishqi did you know Savitri already, you had planned all this. Ahaan gets shocked.