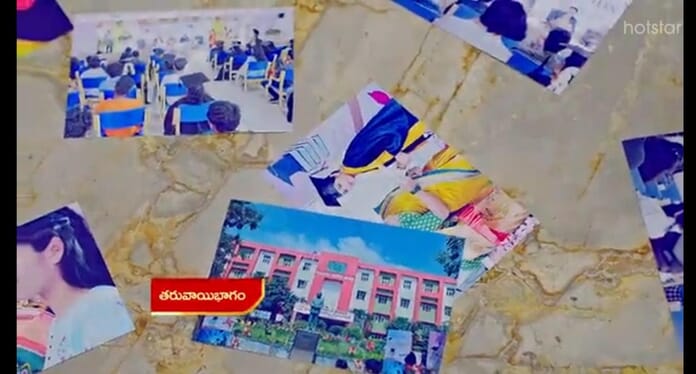 Janaki Kalaganaledu is a Star Maa’s hit popular show. The unique storyline of the show attracted the viewer’s attention. Janaki is a well educated woman who wants to become an IAS while Ramachandra is a sweet vendor. They both are married. Ramachandra adores his wife and supports her in every situation. The leads of the show Janaki and Ramachandra are loved for their chemistry. In yesterday’s episode we saw Vaijayanthi asking Jnanamba for five lakhs and promises to return in one week. Jnanamba agrees to give the money to her. Vaijayanthi thanks her. Janaki asks Ramachandra’s help to go to the coaching. Ramachandra promises to help her. Mallika curses Jnanamba for making her do the house chores. Jnanamba gives the money to Vaijayanthi. She sees the pics laying on the glass table from the graduation party but then she misses on Janaki’s pic.

In the today’s episode we will get to see few rowdies threatening her brother in law holding his collar. Janaki frees her brother in law from the rowdies and asks them why they are hurting him. The rowdies says that he has taken money from them but is not paying it back. Janaki looks at her brother in law Akhil shocked. She then pawns her jewellery to pack off his debts to the money lenders.

In the upcoming episodes we will see Janaki meeting Vaijayanthi and telling her that she has come because Jnanamba wants to invite her again. Vaijayanthi makes her sit on a sofa and goes to bring something. Janaki sees her photo laying on the table and takes it in her hands. She gets scared thinking that Vaijayanthi has seen them. Vaijayanthi calls her from behind and she gets scared.