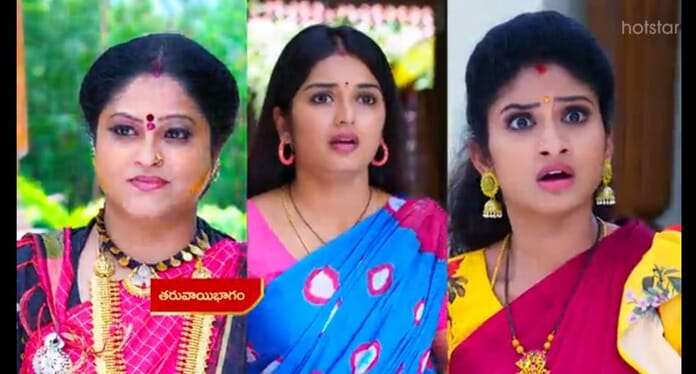 StarMaa’s popular hit show Janaki Kalaganaledu is all set to engage its audience with its twists and turns. The unique storyline of the show attracted the viewer’s attention. In yesterday’s episode, we saw Ramachandra bringing the books into the house. Mallika sees them talking in the dark and gets suspicious. She turns the lights on shocking them so that she can corner them and trap them. Jnanamba comes there and asks them as to what they are doing there and what he is holding. They both get shocked. But somehow they both succeed in convincing her making Mallika’s plan miserably. Later Janaki thanks Ramachandra for understanding her who tells her that it is his responsibility and asks her to keep smiling.

In today’s episode, we will get to see Janaki thanking Ramachandra by standing by her side all the time. He asks her not to thank him ahd tells her that it’s his responsibility. Mallika tries to know about Janaki’s truth so that she can break the bond between her and her mother-in-law. She asks a girl to read the paper for her when she tells her that she can kill English. Mallika chases to beat her after she reads English in a funny way. Later Mallika comes home, she tries to cover it up by saying that she went to bring water but the empty pot falls down and Jnanamba looks at her with anger.

In the upcoming episodes we will see Jnanamba asking her younger son as to what punishment she should give to his wife to which he says that she should draw a thread. Jnanamba punishes her and asks her to draw it till their shop shocking her. Janaki tells Jnanamba that it is hard and requests her to understand. Jnanamba looks at her with anger.

Keep checking out this space for the latest updates of your favourite Telugu shows.