The episode starts with Hima says i have to asks you guys everything like Sourya because you’re feeding me that’s itself great, how can I asks for other things. Karthik cries holding her and asks her to not kill him with her words and asks Soundarya and Deepa to answer whether he ever considered Hima as outsider and he asks Aditya and Shravya to tell his heart is breaking because of her words.

Deepa says you have everything except your mom and from now onwards consider me like your like and Sourya your sister and their is no difference in love they are showing on you and all are sad seeing your tears and they can’t feel sad if they consider you as outsider. Hima gets unconscious. Everyone gets worried.

Mounitha thinks because of this Anji I’m avoiding Karthik, how to erase Anji. Deepa says Hima got fever. Karthik tries to check her but she didn’t let him check. Karthik asks her to take rest in room but Hima falls in Deepa shoulder saying Orphans don’t get rooms. Soundarya and Shravya says you’re our heiress so never say it. Hima says I didn’t say it, even I found it now. Karthik asks her to come inside forgetting everything.

Hima says No Doctor babu. Karthik says did you heard it mom how she is addressing me? Why are you hurting me Hima. Hima says I’m outsider like Sourya. Karthik says I revealed truth so you can feel better thinking I’m not lier but never expected you will take in this way. Hima says glad you revealed it, I got to know you lied to me that you’re my dad and from now onwards you’re Doctor babu for me.

Soundarya says we tried to stop you but you revealed it and Hima is unable to digest the truth, lets talk after Hima health gets better. Karthik says person who raised you is also your dad, their is no difference in my love so let’s be like before, come to room so I will get tablets for you. Deepa asks him to tell her so she can get tablets. Karthik denies asking Deepa to stay away and tries to take Hima from Deepa forcefully. Karthik says you guys made my daughter call me doctor babu. Soundarya asks him to take Hima to room.

Aditya asks Shravya to feed Deepu. Shravya says he is sleeping and Bava garu used to do everything for Hima and it’s tough to see her growing hate towards him. Aditya says I thought she will forgive Brother after knowing truth but never expected this behaviour. Shravya says she’s feeling sad for Hima and Karthik. Aditya assures Deepa will manage and asks her to feed Deepu.

Deepa searches for Sourya everywhere. At home Sourya remembers how Hima is hurt and thinks why her Mom is not revealing truth to Hima. Deepa gets to know from Varanasi that Sourya us at home. Soundarya asks what are you doing here. Deepa says he throws me out from my daughter, you can’t see your son tears than how can I bear my daughter pain. Soundarya says whom I have to tell my pain. Deepa says tell to god, did you got to know what will be the results if you steal baby from her Mom.

This is your mistake so you have to answer. Soundarya says I bought you unite your family. Deepa says but you make her Orphan. You take 8 years to reveal she is my daughter and till now you didn’t even united us and don’t know when will you reveal that I’m her mother, I thought to reveal I’m her mother but seeing Karthik broken state I stopped myself.

Precap – Karthik asks Deepa to not enter his place again saying he can’t ruin his life like hers. Deepa cries. 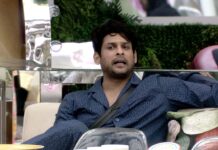 ‘People on set have started telling me that my makeup room gives them a ‘mandir wala’ vibe’ – Rishina Kandhari of Dangal TV’s Aye... 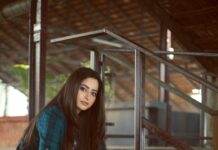 ‘People on set have started telling me that my makeup room...