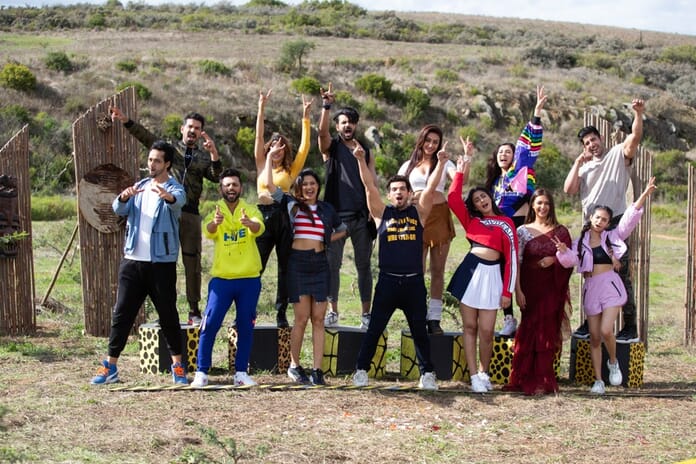 The episode starts with some people forcing 4 contestants to get in a box with two people in each box for two hours. They are taken to a pig sty. Those contestants will be out only after answering Rohit questions. Rahul and Aastha come out first and are asked to perform partner stunt. The pigs will be present inside a cage. The contestant must enter the cage crawling with their partner and pick the lemon with their mouth and reach the opposite end and should drop it in a box. Rahul and Aastha perform the stunt. They both complete the stunt but drops few lemons in the mud. Next Saurabh and Shweta performs the stunt. They both couldn’t collect all the lemons too. Aastha and Rahul collected 12 lemons while Shweta and Saurabh collected 16 lemons. Shweta and Saurabh becomes winner while Rahul and Aastha gets fear Funda.

Nikki Tamboli comes back as wild card contestant. Everyone agrees to give another chance to Nikki. Nikki thanks everyone. Nikki is asked to pick up Shweta’a lost show from the pig sty and she picks it successfully. They all leave. Next day early morning the same special people knocks the rooms of few contestants and are asked to get ready in 5 minutes. They are taken to a closed room with a paper and glass jar in front of them. They play Rohit’s video where Rohit then to count the Rajma present in the tank till their next stunt. He also adds that if anyone sleeps or does any other activity other than counting then they would be electrocuted. They all starts counting and many times the special people electrocuted the contestants for various mistake. They continued till the next day.

Rohit says about the mental torture the other contestants had gone through without sleeping. The contestants comes there and they all plead Rohit to let them go. They say their count to Rohit and Rohit says that their next stunt is a water stunt. A gear boat is rowing with full speed and thrust is attached to it.

Rohit announces the contestant for the stunt. Arjun and Anushka one team, Abhinav and Nikki another team and Varun and Sana the third team. Rohit asks if he would like to use his special power but Arjun says that he will save it for later. Arjun and Anushka performs the stunt first. Their stunt gets incomplete as Anushka unlocks herself unable to handle the pressure. She undergoes treatment as she suffers to breathe. Abhinav and Nikki performs the stunt next. They collected as much as flag as possible.

However the time is up before they could collect all the flag. Abhinav unlocks himself but Nikki gets stuck and struggles to unlock herself. Rescue team rescued her from the thrust. Varun and Sana performed the stunt finally. They collected their flags too but couldn’t complete before the given time. They unlock themselves. Rohit announces the result. Arjun and Anushka gets fear Funda for their incomplete stunt.

Next Abhinav and Nikki collected 6 flags but three went away in waters and so their count is 4 flags. Finally Varun and Sana collected 7 flags but one was after the final point. He also says that Sana collected two flags at a time which will be counted as one too. However still they wins with 5 flags. Arjun and Anushka gets fear funda.

The remaining contestants Divyanka, Mahek and Vishal and taken away by the special people. They are locked inside a freezer truck with 5 degree celsius temperature. As time passes it falls with each celsius and after an hour and 20 minutes it fell to 1 degree celsius. The contestants are then asked to pass from one end of a thrust to another using the hanging swings present between both. After reaching the end the contestant must

The remaining contestants Divyanka, Mahek and Vishal and taken away by the special people. They are locked inside a freezer truck with 5 degree celsius temperature. As time passes it falls with each celsius and after an hour and 20 minutes it fell to 1 degree celsius. The contestants are then asked to pass from one end of a thrust to another using the hanging swings present between both. After reaching the end the contestant must jump in water to complete the stunt. Divyanka performs it first and successfully completes it followed by Mahek. Mahek too completes it. Vishal before he could reach the end falls into the water. Divyanka completes the stunt in 3 minutes while Mahek completes it on 10 minutes. Vishal gets fear funda.