The tenth season of the stunt reality show “Khatron Ke Khiladi” went on air recently. And though our favorite chocolate boy Shivin Narang couldn’t make it to the top 4, he conquered his fears with the show. The “Ek Veer Ki Ardaas Veera” star looked his fashionable best at the finale, which aired recently. Wearing a gold-colored jacket that he paired up with a black tee and black jeans, he was a sight for sore eyes. Not just that, he even got a new haircut especially for the finale, and he killed it totally. 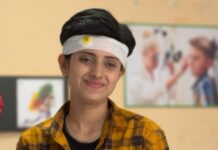