Episode starts with Saritha feels happy seeing Pragya Grihapravesh. Aliya apologies to Pragya and assures her that she won’t repeat her mistakes from now onwards. Pragya says forget the past and let’s make new memories together. Mitali apologies to Pragya and they becomes friends again. Aliya goes to get gift to Pragya. Baljeet sends Mitali to get coffee for them. Vikram calls Abhi and inform him that don’t know what happened to Ranbir but he is busy with his boxing in the night and didn’t finished his work on time and your yearly event can’t happen this time that’s why I’m apologizing you. Abhi says don’t worry I will set everything, you’re from Groom side so don’t apologize me, show your attitude with Tashan. Vikram tells him he will show it. Abhi cuts the call asking him to don’t do it in over way.

Abhi goes to Pragya and asks her to give him 2minutes. Dadi takes Mitali with her to give them privacy. Pragya says I will give you whole time and today you have to stay at home so we can spend time together with kids as a family. Abhi says I’m promising you but now I have to go to office to set the problems created by Ranbir and I will return home quickly. Pragya agrees than Abhi goes to office. Baljeet takes Pragya to lit the Diya at Mandir.

Prachi asks Ranbir to take coffee but he denies. Prachi about to tell something than he turns while shouting he don’t need it. Coffee fell down from her hands than Prachi cleans his dress with tissue. Ranbir says you’re so good but I dont like your fake care so show it to someone else. Prachi asks what she did. Ranbir leaves his cabin asking her to stay away from him. Prachi feels bad and clears the broken pieces of coffee cup. Rhea comes to cabin and tells her this cleaning work suits you Prachi and don’t feel that we can live happily together because I can make Dad send you and Mom from home. Prachi says don’t do it. Rhea says you’re wrong, I’m telling you that I can do it if you do any mistake. Prachi tells her she won’t break their deal. Ranbir enters to his cabin and asks what’s that deal.

Pragya lits Diya at Mandir and performs Aarti. Abhi returns to home. Baljeet asks why didn’t he went for work. Abhi tells her he don’t want to leave seeing her face. Baljeet says I know you returned for your wife. Abhi asks Pragya to choose his dress. Pragya asks him to go to his room and than she notices Tanu entering their place and she warns her to leave from their place. Tanu asks her to call Abhi so they can talk. Pragya says I won’t let your bad eye fell on him so leave immediately otherwise I will throw you out. Tanu says don’t touch me because I came here with Police. Pragya asks what right you have at this place to bring Police? I will get you arrested if you won’t leave from here.

Abhi comes downstairs and asks Tanu, why she came to their place. Tanu calls inspection and asks him to arrest Abhi. Pragya asks what he did? Tanu says he raped me. Everyone gets stunned. 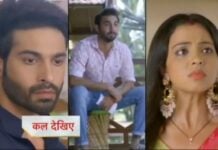