Episode begins with Karan tells Preeta that he was missing her and asks what is she doing in Mahesh’s room. He says she should stay beside him to witness his marriage. Rakhi asks Krithika to bring more flowers. Dadi asks Priest to tell if he wants anything else. Sameer asks Priest what he wants. Priest says he want bride. Sameer gets confused hearing him. Dadi says Priest talking about Mahira. Mahira comes there with Sherlyn. Sameer says he will bring everyone and leaves from there. Ramona asks Rishab to join them. Karan notices Preeta’s tears and says why she is doing drama with fake tears in front of Mahesh. He says he knows that she would have been blaming him to his father. Preeta thinks to tell him about Mahira and Sherlyn’s plan. She asks him to listen her once and cries badly. He asks her to shut up saying he won’t listen her and not gonna believe her fake tears too. Sristy asks Sameer that did he came with any plan to stop the wedding. Sameer says what he should do now. She asks him to think about the plan to unite Karan and Preeta.

Karan drags Preeta with him. Rishab notices that and asks him to leave Preeta’s hand. Karan asks him to not interfere saying he knows what he is doing. Mahira tries to stop him but he stops her from saying anything and says she too knows that this wedding can’t happen without Preeta. He asks Priest to start the rituals and asks Rakhi to tie the alliance cloth saying this time it will be real. Rakhi ties the alliance cloth, seeing that Preeta recalls how Sarla tied that for her and Karan’s wedding. Karan asks Preeta to concentrate on him. Priest asks Karan to concentrate on Mahira because he is marrying her. Karan says he knows what he is doing and asks him to do his work. Dadi says how Karan can talk like this to Priest. Karan says everyone knows that he doesn’t likes it when someone comes between him and Preeta.

Sristy asks Sameer to tell what he thought. He says they should do what Karan did on Preeta and Prithvi’s wedding. He says they should swap the groom. She asks but who will marry Mahira. He says they doesn’t have any other groom that’s why he himself rejected his plan. Priest asks Karan and Mahira to stand for pheres. Mahira asks Krithika to give flowers to Preeta. Sherlyn leaves from there seeing Prithvi’s call. She tells him that she wants to finish Mahesh’s chapter fully and shocks seeing Prithvi in luthra house. She asks what is he doing here. He says he was missing her that’s why he came to meet her. She asks him to tell the real reason. He says he came to make sure that there is no problem in Karan and Mahira’s wedding. She says pheres started already and she will handle it so no need of him. He says Preeta is here means she is going to stop the wedding. He says for luthra’s happiness Preeta can do anything even murder. He says Preeta still thinks Karan as her husband and she won’t let anyone marry her husband. She says he doesn’t know Preeta because even though she is still legally Karan’s wife but she won’t stop the wedding going against luthra’s.

Sarla tells Janki that Preeta needs her so she should go to luthra house. Janki stops her. Sarla says this time Preeta can’t handle herself so she should stay beside her otherwise Preeta may do something for that she has to regret later. Sameer says he is feeling suffocated and needs fresh air to think fresh idea. Sristy stops him saying he is coward and trying to escape from her. She gets an idea to stop the wedding. Police comes there and asks to stop the wedding. 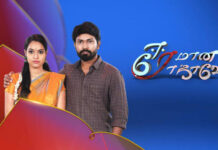