Episode begins with Preeta calls Sarla and gets worried when she doesn’t picks her call. Sherlyn tells Mahira that she feels strange like something bad going to happen. She says she searched Karan in whole house but he is not in the house, what if Preeta called him and he went to meet her. Mahira asks what if Sherlyn’s boyfriend did something with Karan. Sherlyn says nothing happened like that. Then Mahira becomes relax and says now nothing to worry because Karan will come back to marry her. Sherlyn says Mahira behaving weird now and says Mahira’s dream may just end up as her dream only till end because of her over confident. She asks her to stay alert when it’s about Preeta and leaves from there. On the other side, Karan fights with the Theif and takes Sarla’s purse from him. The Theif tries to hurt Karan with knife. Seeing that Sarla asks him to leave Karan and says she will give her purse to him if he wants then. That time Police comes there and takes the Theif with them. That Theif keep shouts that he won’t leave Karan. Karan’s fans starts to click selfie with him. Sarla thanks him and leaves from there.

Rishab searches Karan in his room and gets to know from Salil that he have some office work to complete. In arora family everyone gets worried about Sarla. Sarla reaches her house. Sristy asks why she didn’t attended the call and why it took this much time to came from market. Sarla asks why they are worried, she just went to market. Sristy says Sarla can’t even imagine how much they were worried for her. Sarla says now Sristy would have understand that how she would have felt when Sristy doesn’t attends her call and goes out without informing her. Sristy asks did Sarla did everything to teach her lesson. Sarla says it’s not like how Sristy thinks. Beeji asks why Sarla came late. Sarla recalls how Karan helped her but decides not to tell them about him.

Janki notices Sarla’s damaged purse and asks how it happened. Then Sristy notices scratches on Sarla’s hand and gets worried. Sarla says while coming back someone tried to steal her purse and that’s how everything happened. She says she saw Karan’s car in their area and asks did he came to their house. Preeta says Karan came to their house. Sarla asks why he came. Sristy says he came to give marriage invitation to Preeta. Sarla shockingly sees Preeta hearing that.

In luthra house, Rishab tells Kareena that he have some emergency work in office so he have to go. Dadi says it’s Karan’s marriage and Rishab can’t go to office. Kareena says there is lot of preparations are pending and he should not go anywhere. Krithika thinks why Sherlyn and Mahira always sticks with together. Sherlyn asks Mahira to be careful with Krithika. Ramona asks where is Karan and asks did he went for cricket practice or what. Seeing everyone’s reaction she says she was just joking. Karan comes there. Kareena asks where he went without informing anyone. Karan says he went to invite Preeta for his marriage. Sarla curses Karan and says how can he even think to invite Preeta for his marriage.Janki says Karan inviting his wife to witness his marriage. Sarla says Preeta is not his wife and asks did Preeta want to attend Karan and Mahira’s marriage. Preeta says no. Sarla says Preeta doesn’t want to go so from arora family no one will attend Karan’s marriage. Kareena asks what happened to Karan and asks why he invited Preeta even after knowing what all problem she created in his marriage rituals. 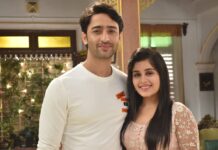