If there is anything that can be said with certainty about actor Meera Deosthale, it is that she is very comfortable in her skin. The Udaan actor says that she has always been well aware of how she looks and loves herself the way she is. “I have always been told that I am not very beautiful when it comes to conventional good looks by my family and those close to me. And I am very grateful that they have done this since it has given me an honest perspective. So, I know I am not extraordinarily beautiful, but I also know my strengths. I have also been told that I look cute and pretty. I am someone who is very comfortable with how I look and have always been this way,” she says.

Such is her confidence that Meera doesn’t even let trolls and body shamers bog her down. “I think I am very lucky to have such loving fans and followers around me. Whenever I put up a post, most of the comments are positive. But even if I get some negative comments, I don’t let them bother me. I have so much going for me in my life that I don’t dwell on such negativity too much. In fact, I have sometimes gone into these accounts and these people don’t even have pictures. Imagine, being faceless yourself and commenting on others!” she says.

However, Meera is very aware of the fact that social media popularity matters a lot in shaping an actor’s career today. “So, when I was part of daily soaps, I always thought that what I do on screen matters and nothing else. But I have seen that if I want to be part of web series or even music videos, I need to have a good social media following. Until a few years ago, I was not comfortable on social media and I barely posted anything. But I have realised now that it is important to post stuff regularly as people want to see you. I am gradually beginning to enjoy it,” she says.

Talking about future plans, Meera says, “I have always been someone who makes short term plans and goals. This year, I realised that all the roles that I have played so far have been from UP. So I have decided to take on different roles now. Also, I want to be part of web series, short films and music videos.” 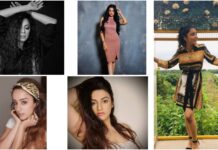