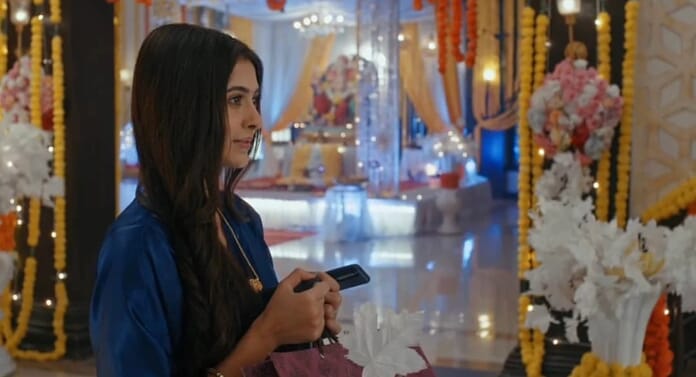 In viewers favorite show Mehndi Hai Rachne Waali ACP meets Raghav and warns him. Pallavi tells ACP that Raghav will never do anything wrong. Later Sunny fails to expose Raghav. Now it will be interesting to see will Sunny plans some other way to expose Raghav? Will Raghav forgive Pallavi?

In the current track it shown that one of the officer asks the tea vendor to learn on his own about ACP Laxmi and when the tea vendor gives tea ACP pays for it also asks him to let her know if anyone buys tea without paying him. She then talks to the other officer about Raghav and his smuggling also how no one is going against him even his competitors and they have no proof against him. The officer tells ACP that most of the people working under Raghav not even know that they are working for Raghav also tells its them who has to go and meet Raghav if they want so ACP tells that they can go and meet Raghav now itself. Sunny tells Keerti that hereafter their family members wont insult them when Keerti tells him that she found few houses and they have to select one and shift there so that they dont have to face humiliation. Nikhil and Abhishek comes to meet Pallavi. Seeing Raghav and Farhad Abhishek tells that he has work so he is leaving. Pallavi tells Nikhil that Abhishek is smart so he wont never get involved in illegal things. ACP comes to RR mansion and introduces herself. Raghav tells ACP that he wont meet people without appointment. Pallavi questions ACP the latter tells sometimes police comes to the house to warn people about the consequences of their wrong doings. She then asks Raghav why he didn’t filed a complaint when the necklace was stolen. Raghav tells ACP that they can have this conversation in his office. Pallavi thinks that there is something wrong is happening for sure. ACP questions Raghav about his relationship with the custom officers to which Raghav tells he has to because he needs their help. He also asks ACP to check his accounts if she wants but ACP tells not today also warns Raghav that if she finds anything wrong in his accounts then he not only has to pay for the fine he needs to pay for all the diamonds custom charges and leaves. Sunny and Keerti watches everything. Sunny gets happy. Pallavi tells ACP that neither she nor her husband Raghav do something which is wrong and illegal while giving prasad to ACP. Sunny goes and gives the file to Pallavi saying it’s the proof so now she needs to slap Raghav infront of everyone like she promised. Raghav and Farhad sees everything. Farhad gets worried but Raghav stops him from doing anything. He then smiles when Pallavi shows Sunny the file is filled with full of her photos. She then goes and brings broom with her. Sunny gets worried recalling her promises. Pallavi stops seeing Keerti and warns Sunny to never try to create a difference between her and Raghav this time Keerti saved him the same wont happen next time.

In the upcoming episode it will be shown that Raghav will say to Pallavi that in life there will be a time where they have to support the wrong doings in that time what she will do. Pallavi will say to Raghav that they sure will face such situations but she is so sure Raghav will never do anything that is not right. Raghav will sadly smile at Pallavi. ACP will follow Abhishek. She will ask him to stop or else he will shoot him. Pallavi will be in that place too. She will get shocked when the blood splashes on her face. Raghav will get shocked and ask whether Pallavi is Safe or not.