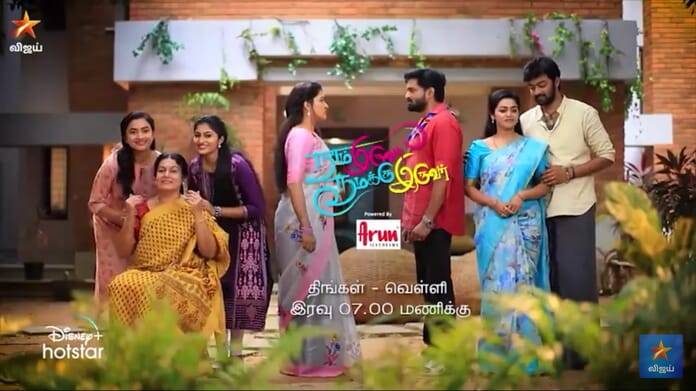 The episode starts with Rathinavelu is thinking about Maha’s word and her childhood days. Fortune teller comes there and calls him. He enquires to her who is she? Is she need any help? She informs to him that he is the one need help now! Why is he carrying the burden leave it you will get peace. When he loves all his heart is at peace when he started giving place to ego and hate he started feeling burden in his heart.

Is his upbringing and love on his son in law is fake? He tells her she don’t know what did he done to him? She tells him that both are loving him genuinely don’t doubt on it. Maha smiles is everything in this house. Doesn’t he asked his daughter to abort her child? He went to all temple to get a grand child then why is he doing like this? She says to him that he has no rights to abort that baby. He is wishing to live with his daughter same goes to Maha also. How could he snatch her happiness from her. She will cry life long thinking about it.

As a father he wanna pray to see his heir living happily but he is trying to destroy it. Rathinavelu question her what should he do now? She asks him to save that child soon. Rathinavelu comes to hospital and enquires to Doctor Where is Maha he wanna meet her. He done mistake his daughter don’t like to abort this baby he asked her to do it. Doctor says to him they might consider that little soul and take care of it instead of aborting it. She reveals to him that she didn’t abort her baby. She is crying in ward.

Rathinavelu comes there and apologies to Maha for behaving like stone heart person when she is ready to abort her baby. He asks her to forgive him. Maha says to him don’t say like that. Rathinavelu regrets for asking her to abort the baby. He is a stone heart person that’s why he decided to destroy the heir of him? Maha says to him that he came behind her to stop her from aborting her child without peace it’s showing his wetness in his heart.

Maha questions him he don’t change his decision right? He nods to her. Parvathy apologies to Maha for acting in rush. She shares to them that she can’t able to forget the way Rathinavelu fall on his feet. She fears something happen to her husband that’s why she hated him. Rathinavelu questions Maha is he know about her pregnancy? She nods negatively. He asks her to say it to him first.

Maha calls to Mayan and informs to him that she wanna say one important news to him. She asks him to guess it. Mayan tells her that she is confusing him. Mayan says to her may Rathinavelu search a groom for her? She nods to him and praises the groom in front of him to irritate him. Mayan asks her to say what’s it. Maha tells him that she will say it to him after meeting him because she wanna see the reaction on his face. She asks him to buy sweets for her and Jasmin flowers too.

Mayan meets Maha in temple and gives sweets to her. Maha stares to him that Rathinavelu forgave him after she said to him clearly that she only needs Mayan in her life. She asks him to place the Jasmin flower on her head. Mayan questions her what about Parvathy? She informs to him she too forgave him. Maha asks Mayan to fees sweets to him. He feeds sweet to her. Maha about to share the good news to him. Police comes there searching for Mayan. Constable asks him to come to station. Police takes him from there for investigation leaving Maha behind.