The episode starts with Surya asking Pushba if she went out while the person from his office had come. Pushba says she went out to buy milk to make tea for him. Subu scolds Pushba. Surya asks where the file was when he had come. Pushba says the file was on the table where Anu had placed. Surya imagines what might have happened. Then he recalls Meera accusing Anu. He asks them to wait for a while and leaves. Subu scolds Pushba for hiding the matter from him.

Surya tells Chandra to leave. He further tells he got to know about the culprit. Chandra says he feels relieved knowing Anu is innocent. He was feeling guilty that he had involved Anu in this matter. He asks who is the culprit. Surya says he will tell him later. Chandra leaves. Surya gets to know who had visited Anu’s house and calls that person. Surya threatens him to tell the truth. The man cries apologizing.

Meera asks Pankaj why he doesn’t suggest Surya being his good friend. Pankaj says Surya knows what’s right and wrong so he doesn’t need to suggest him anything. Meera says Surya is talking with Anu’s parents leaving an important meeting. As they’re conversing, Surya comes there. He asks Pankaj to go out as he wants to talk to Meera.

Meera asks he seems upset but she doesn’t understand the reason. Surya says he’s confused to understand people. He asks her to help. He asks whether he should call police or not then he tells what’s the need when everything is clear now. He asks Meera’s opinion. She says yes we have all the evidence in front of the eyes. Surya asks if she trusts him. Meera saya she trusts him 100%. He asks her to give her mobile. Meera gets shocked. She hesitates. Surya asks her to admit her mistake before he himself finds it out looking at her phone. Meera cries. Surya says he got his answer. Surya starts lashing out at Meera. He asks her why she has so much ego, why she’s angry on Anu that she wants to insult Anu in front of all. If she understands how shameful act she has committed. He asks why she did like that.

Meera admits she hates Anu. She says she had worked hard so long to earn his trust, but Anu easily earned his trust in a short span of time. She can’t tolerate the great Surya Praksh falling for Anu. Everything has changed in this office, especially he has changed ever since Anu has entered this office. He started giving her so much importance. She says she can’t tolerate all this. Surya says if she can’t tolerate, she should have gone away getting a transfer or leaving the job. He never expected she can stoop so low. Surya says he has promised to Anu’s parents that he will make the culprit to apologize to them, but now he can’t make it happen since she’s a part of this company and she had worked hard for this company. He says he doesn’t know what more to say, but he’s deeply hurt. He leaves while Meera cries. 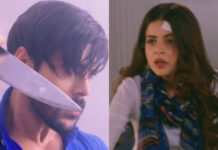