The episode starts with Ragupathi scolding Sampath. Ragupathi asks Ranjini why Subu’s house is locked. He asks if Police took them Rajini goes to check. Ramya and Sambath indirectly mokes Ragupathi. Ranjini comes back. She says they must have gone to Anu’s office. Ragupathi is disappointed that Police hasn’t arrested them.

At Surya’s office, Subu tells that they never received any complaint on Anu. Pushba says she has ashamed to face colony people. They tell they don’t know what’s in the file, but the employees from his office easily accused them of fraudulent activities. Subu asks if he wants he’s ready to take Anu with them. He asks them to give him some time. Surya asks them to be patient. He says he’s on their side as he trusts Anu. He further tells all evidence are against Anu.

Subu and Pushba looks worried. Subu asks them to corporate and answer his questions. They agree. Surya asks if any stranger visited their house when the file was at their house. After thinking Pushba hesitantly tells that one person from his office had come. Surya asks who had come, why he had come. When Pushba is silent, Subu orders her to speak. Surya calms down Subu. Surya asks her not to hide anything since it’s about her daughter’s life.

Meera tells that Anu’s parents have come to meet Surya without any appointment and expresses her annoyance towards Anu and Anu’s parents. She wonders what they have discussing with Surya. Pankaj tells a proverb. Meera gets irritated and asked him to stop.

Pushba says she forgot about that person have visited their house untill Surya asks. Subu angrily asks her to tell who he is. Pushba tells she doesn’t know his name but she doesn’t think there’s any link between him and this problem. Surya asks to tell the purpose of his visit. Pushba apologizes to Subu and says he has come to give snacks order to her. Meera had sent him.

Meera said everyone liked the snacks she had given to Anu once especially Chandra so she asked to make her some sweets and snacks for their company. First she doesn’t want to accept the order, but later agreed thinking the money she will earn will be helpful for Subu. The latter shouts at Pushba. Pushba says she agreed with good intentions. Surya calms Subu down. Surya asks Pushba to tell what happened in detail.

A FB is shown a man sent by Meera, comes to Anu’s house. He praises Pushba’s snacks. He gives her 50k check. Pushba makes ginger tea for him. He praises the tea. He asks her to keep this matter secret and takes her leave. FB ends. Surya looks on thinking. 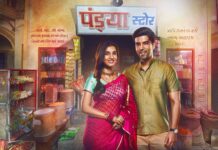