Today the episode begins with Kathir came out of the room and stand outside.. Mulla tries to get up from the bed and came out of the room.. She noticed Kathir and asked why won’t you see? he said I won’t feel sleepy.. Both laughs… and chatting about Padma and Senthil.

Mulla scold Kathir.. Kathir laughs… Mulla asked him shall we walk for a while.. Kathir agrees… Suddenly Padma came out of the room.. and enquire Mulla.. are you planning to go out.. Senthil will come and disturb me..and urged her to come and sleep.. Later she pulled her and take her to the room..

Next day Mulla and Kathir go for a walk in the beach.. Kathir enquire Mulla are you slept well? Mulla replies Padma laments about Senthil how can I sleep.. I won’t sleep properly….  Later, Mulla bargain with the seller.. Kathir appreciate her. then Mulla and Kathir took selfies.. Mulla said that I going to send this photo to Kannan. Kathir refused.. she won’t listen him and ran.. Kathir tries to catch her..

On the other side.. Jeeva visited her daughter.. Jeeva feels elated after visiting Meena and his newborn daughter.. Janardhan paid the hospital bill.. Jeeva is overwhelmed.. Janardhan and Kalai convince him by saying after discharge we are going to see our daughter everyday.. don’t worry of that..

Kathir and Mulla standing together and chatting.. She worries about going to town.. Kathir convince her by saying I will bring you here… she asked when.. He said next year.. Mulla became upset..  Later, Padma and Senthil arrives… and asked them to play tennis.. Mulla and Kathir refused.. Mulla urged Padma to play dragon ride..  All agrees and went..

All enjoyed the dragon ride except Senthil..  Later they went into the roller coaster all feels faints.. Padma mock at Kathir..  Later, Mulla and Kathir spend some quality time.

Lakshmi talk to Meena.. Suddenly Kasthuri and Jaga arrives.. and enquire about Meena and her daughter.. Later, Jaga enquire about Kathir..Kannan said he is enjoying there..

Mulla and Kathir went to beach.. Both sitting together and chatting.. she collect the shells.. Both spend some quality time.. Later, Kathir and Mulla together build a sand hut in the beach.. Padma ran near the hut and damage their hut.. Mulla scold her…

All went to the room and pack their bags.. Kathir asked are you ready Mulla? Mulla cries and said if we go home you do the same..you won’t spend time with me.. Kathir hold her hand and pours out his heart to Mulla.. Kathir said whether I suits you are not….

with this the episode ends… 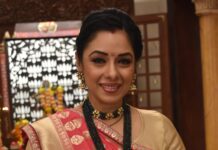 Anupamaa: Anupamaa to start on a new journey of discovering herself