Today the episode begins with Moorthy decides to get a loan by mortgaging his home. The family sits together. Moorthy asks Kathir shall I ask the Lakshmi opinion once before taking a loan. Kathir tells him to ask Lakshmi. Moorthy hesitates. Later, Moorthy informs Lakshmi that I am going to take a loan to pay Radhika. Lakshmi says already one loan how will you handle the family if you take another loan.

Moorthy says I will not take a loan if you do not like it. Lakshmi is scared that if you don’t repay the amount then it will get into trouble. Lakshmi says we should look at this from all angles. Lakshmi disagrees.

Moorthy takes Dhanam to the hospital for a checkup. Doctor questions Dhanam about her health condition. Moorthy intervenes and says she often vomits. The doctor says it’s normal during pregnancy. Later, the doctor examines Dhanam and informs Moorthy that the baby is developing well. Moorthy becomes overjoy after hears that.

Janardhan looks at the building work and tells the Manager to finish the work within a week. He decides to open a supermarket within this week. The manager asks for the name of the supermarket. Janardhan says I am going to start a supermarket in Meena’s name and my granddaughter is going to open this supermarket.

Janardhan says I did not lose in any case, but in the case of Meena, I lost. Janardhan urges Manager to finish the supermarket work to compete with Moorthy. The manager asks Janardhan for an opening date. Janardhan says I’m going to decide the date for the opening ceremony right now and leaves.

Moorthy returns from the hospital alonely. Mulla asks Moorthy about Dhanam. Moorthy says I dropped her in her home. She will come in the evening. At that moment, Janardhan comes to Moorthy’s home. Moorthy and his family welcome Janardhan. Janardhan asks for a big plate. Mulla brings the plate. Janardhan invites Moorthy’s family for the supermarket opening ceremony. Moorthy becomes upset.

Lakshmi says to Moorthy that Janardhan is doing it on purpose. Moorthy informs his brothers about this matter. Kathir consoles Moorthy.

with this, the episode ends. 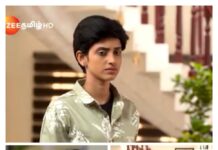