The episode starts with Reyansh tells Dadi that he will not help Vardhan until he apologizes to Praniti. Saying this, he leaves. Paraniti gives a look to Dadi and she too leaves from there. Daadi says Reyansh has supported Parneeti today but one-day Reyansh will come back to her. There Reyansh remembers his and Praniti moment and only then Maan comes there.

Maan says that his love for Paraniti is clearly visible in his eyes and he should confess it to Paraniti. Reyansh says that he cannot because he is not fit for her. Maan starts telling Reyansh about love and girls, only then Reyansh stops him.

And asks where who teach him such big things, he tells Navya. Daadi overhears this. Reyansh hugs Maan and says very well. He also says that at least someone is doing something good in this house.

Dadi pulls Armaan’s ears and says that because of him Maan has fallen into Navya’s trap and she asks him to do something about it. Armaan says that he cannot do anything on this issue. Daadi says what he mean. Armaan says that he wants to stay away from Navya and hence he does not want to participate in this game.

Daadi says that the issue started because of him, so he has to deal with it. Dadi says that she is already upset with Paraniti and she can no longer afford Navya’s case. Dadi insists on Armaan and Armaan says okay he will do something. He leaves he room and notice Riya.

Riya is shadings tears and she asks Armaan if Navya incident was true. She says that she felt that Navya is doing all this drama to get him. She says she misunderstood Navya because of him. Armaan says it is not what she is thinking. He says that he was in a relationship with Navya but now he only loves her. Riya says she no longer believes him. And she ask him to stay away from her and leaves.

Reyansh is thinking about Paraniti. He thinks that it is true that he is doing a lot for Paraniti and is also in love with her. While Paraniti comes there. There Grandma is scolding Maan and says that Reyansh told her to take care of Navya and he fell in love with her. She beats him and Maan tells her to calm down. Daadi says that already the chapter of Paraniti is not closed and now Maan is going to start the chapter of Navya. Dadi says that her house is not a religious place for  illegitimate children, that first Paraniti came and now Navya is ready to come.

Armaan asks Maan how he can fall in love with Navya. Maan says that he should concentrate on his work and not on the lives of others. Armaan gets angry with him. And he says that his life has become a joke, first Navya make joke of him and now his wife stops talking to him.

There Reyansh tells Paraniti that she should not withdraw the case at any cost. Paraniti says she feels happy as he is fighting for the rights of women. And she promises that she will not take the case back. Episode end. 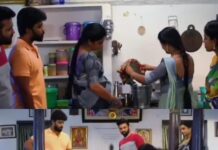