Colors TV newly launched show Pavitra Bhagya managed to grab viewers attention on its first day of it’s launch with its unique storyline. The show focuses on the lives Reyaansh, Pranati and Jugnu and the change in equations in their life. As its reported earlier Reyaansh supports Pranati and shows his trust on her. Now it will be seen that Pranati exposes Vardhan and Reyaansh beats him for eyeing and badmouthing Pranati.

In the previous episodes it’s seen that Reyaansh says Pranati to prove her accusations. Dadi tries throwing out Pranati but Reyaansh stops her saying that a girl’s dignity is questioned and Pranati can leave only after proving herself. However he lies to Dadi that he did so to save Vardhan’s reputation. Later Reyaansh promises Pranati to support her and bring out the truth. However his jealousy for Archit stands on the way as he struggles between his love and jealousy.

In the upcoming episodes it will be seen that Jugnu will successfully spoils Vardhan’s plan of giving sleeping doze to Pranati to hide his truth. In the meantime Reyaansh goes to the hotel to find the truth. However he couldn’t find anything to prove Pranati’s innocence and gets doubtful.

Later Pranati confronts Vardhan over his plans and he reveals his true face which gets exposed in front of Reyaansh. To the top of it Vardhan justifies his actions badmouthing Pranati’s character making Reyaansh lose it cool. Reyaansh beats Vardhan black and blue for his cheap act.

Will Reyaansh gives Pranati her deserved respect? Will the family support Reyaansh and Pranati over Vardhan? 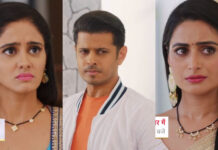