Zee tv popular show Kundali Bhagya is all set for a major turning point in their show. Earlier its seen that, Kareena and Ramona says Karan did wrong by inviting Preeta to his wedding. Karan asks did Mahira have any problem with his decision. Before Mahira says anything, Karan says even if she has any problem he can’t do anything with it. Karan says he hates Preeta so much and to take his revenge he invited her to his wedding. Dadi says Karan’s actions says Preeta matters for him and she still affects him. She says he may say he hates her but he just keep thinking and talking about her because she matters for him and his anger towards her also says he loves her that’s why he took decision of inviting her without asking his family members permission. Karan says luthra’s faced lot of insults because of Preeta and by attending his wedding now she will face insults. Sristy convinces Preeta to fight against Sherlyn and Mahira. Preeta decides to attend Karan’s wedding. Sristy asks Sameer to help her to stop Karan’s wedding.

In the upcoming episodes it will be seen that Preeta tells Sarla that she believes herself and she can witness Karan marrying Mahira. She says by seeing that she won’t get hurt and her heart won’t break. She says when he can marry someone else then why she should feel bad thinking about him just sitting in her home so she decided to attend his wedding. Sarla shocks hearing her decision.

Will Sarla allow Preeta to attend Karan’s wedding? Will Karan realize his feelings? Erica Fernandes shares last few pictures as Prerna Sharma, here is what more we will miss about her: Kasauti Zindagi Kay 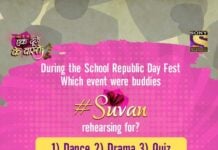