Episode begins with Bhisma comes to meet Krishna in a secret place. Both of them gets emotional to meet each other. Krishna says to him you are also partly responsible for the recent happenings of Hastinapur. It all started with your great promise which led to all those desperately unseen wrongdoings of Hastinapur. He says to Bhsima I am not complaining but just expressing my view about what all happened. Bhisma says I knew that your entry will bring so many questions which will be difficult to answer.

Krishna says I came here to give you the correct informations against the wrong ones that are reaching you. He told him the real reason behind sending armies to pandavas. He says they are sent to kill the pandavas not to bring them back to Hastinapur. They go apart from this point and on the other side, Karna asks Duryodhan why did you say a lie to a great warrior like Bhisma like this? Duryodhan gets angry on him when Shakuni says to him you run a kingdom and has no idea about politics. In politics, truth or lie doesn’t matter but timing matters. If the tyming isn’t correct to speak any truth then you should speak what is good for you.

Karna says I better be away from these kind of maligned planning and plotting. He says if my friend fails to speak the truth then I will do it myself. Duryodhan asks him if you go then when you will be back then you will meet my deadbody and not me. Karn says my responsibility is to protect your life then why I will be the reason of your death. He left saying please keep me away from these dirty politics. Shakuni manipulates Duryodhan that our armies can attack on pandavas anytime. This time we have benefit from both sides as either our armies will kill them or else if they kill our armies they will be called as traitors.

Both of them gets happy to think about this while on the other side, pandavas wants to attack on the armies of Hastinapur but Krishna stops them from attacking and says we will not attack untill they are attacking us. However all are getting impatient as they are being captured from all sides. All says to Krishna that if any of us got hurt then you have to take the responsibility. Before the armies can attack Vidur comes there and stops them and asks Pandavas to come along with him to Hastinapur as Bhisma sends me here.

Precap – Arjun is returning to Hastinapur with Krishna when in the way they saw some armies are approaching them. 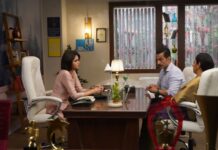