Episode begins with Kanak asks Anant that why he trusted Gehna for confidential file when she is uneducated. Chetan asks what happened. Kanak says Gehna lost Anant’s file. Anant says it was not any normal file and his office management trusted him that’s why they gave this huge responsibility to him but he lost the file now they will take action against him.

Jamuna asks Gehna to remember that did she kept the file anywhere else and says if they don’t find the file then Anant’s life finished. Anant’s boss comes there and asks about file. Anant says file is missing which angers his boss.

Anant’s boss fires Anant from job and says he become greedy so would have sold that file and now acting like it’s missing. Gehna says Anant did nothing wrong. Jamuna says Anant won’t do something like that.

Anant’s boss says if that file reaches terrorists then he can’t even imagine what will happen to nation’s security and says Anant has to submit the file before 5pm otherwise he has to face the consequences and says he can’t leave the house until he finds the file. Kanak says now she will also see how Gehna saves Anant.

Gehna says what if someone stole the file. Anant asks how is that possible when the cupboard was locked and she has the key and tells her to not try to cover up her careless behaviour and says Kanak was right, he did huge mistake by giving that file to her and asks did she really gave that file to laundry guy. He asks her to answer him and says now he just lost his job soon he will end up in jail. He tells her to not come in front of him.

Sagar says he hided the file in safe place. Kanak says he should not make any mistake because Police also involved this time. He thinks only that file can help him to get Gehna. Gehna suspects Sagar and says only he can do something like this and searches the file in his room. Sagar calls everyone and tells them to ask Gehna that what is she doing in his room. He says she came to blame him again to get sympathy from family. Hiral says Gehna trying to escape by putting the blame on Sagar.

Gehna says she is sure that it’s Sagar who stoled the file. Kanak asks how can she blame him. Hema asks what proof she has against him. Sagar says when he doesn’t even know the existence of file then how can he steal that. Paresh says no one knows that Anant has the file. Anant yells at Gehna and asks her to not waste the time and tells her to search the file.

Anant says it’s 5pm, don’t know what will happen now. Police comes there and says they are here to arrest Anant. Police searches the file but doesn’t find anywhere in the house. Anant thinks his family facing insult because of him and Gehna. Police arrests Anant. 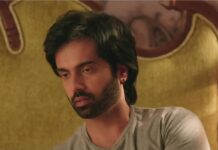