Highly anticipated film of Katrina Kaif and Salman Khan starrer Tiger Zinda Hai is making buzz again. This time Salman has shared a still from movie saying,”Back together, in Tiger Zinda Hai”. He is definitely not intrested in their love affair rumours to be speculated crossing boundaries. Here is what he tweeted.

BACK TOGETHER , IN TIGER ZINDA HAI . pic.twitter.com/H8D0Gv8cTT

With more updates, Let’s Get Buzzing!! 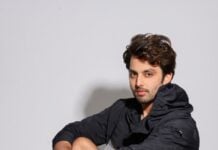